Our sixth day in Honduras was very relaxing and fun.
At some point there was a hawk flying circles above the chicken pen. Nathaniel went out with his bb gun to scare it off. 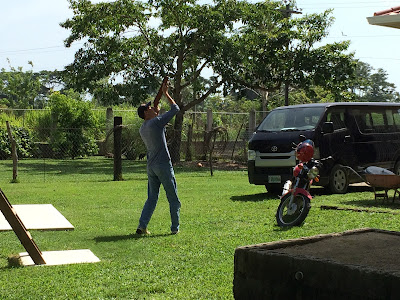 I got in the hammock with the girls. There were three of us so it was a little smooshed... 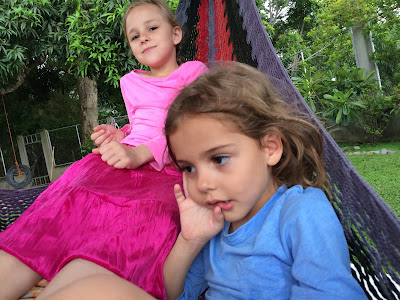 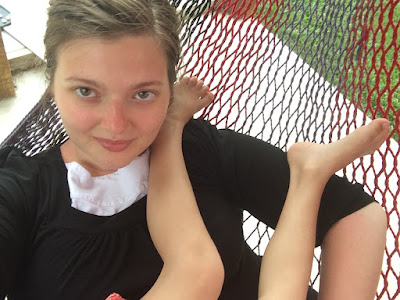 Bro. Schreckhise sat down and played the piano and everyone sang. It was beautiful! 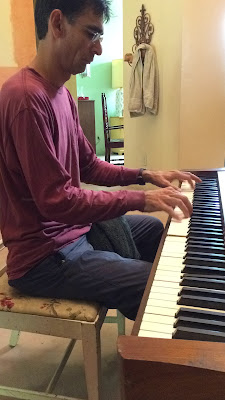 After everyone got ready and ate breakfast, we headed out to the river. It was another hot hot day and we were ready for a day of playing in the water.
We walked down a pathway of boulders and rocks... 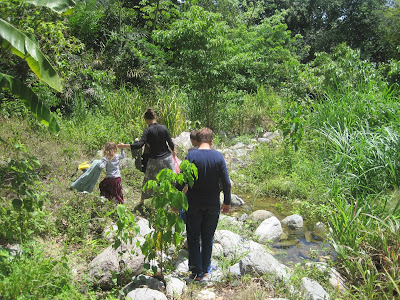 ...to arrive at this beautiful, crystal clear river. 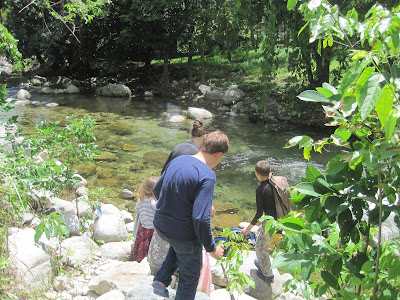 Everybody was so happy to see the water! 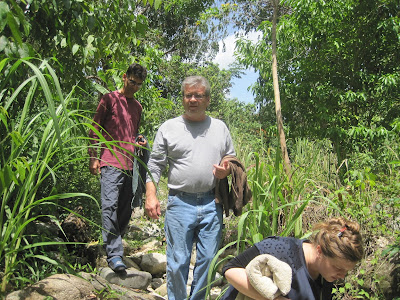 We all jumped in pretty quickly. The water was surprisingly cold, but not too cold. It was perfectly refreshing! 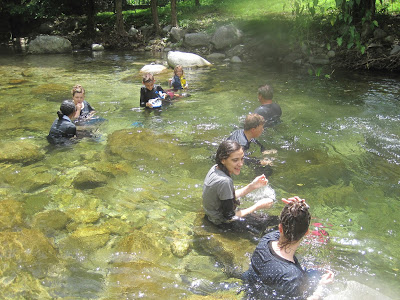 The guys worked on building a dam at the end of where we were swimming and succeeded in making the water line rise about a foot. 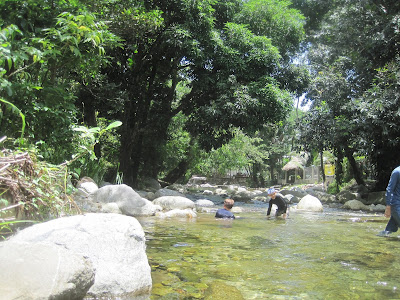 After swimming and playing in the water for many hours, we headed back home. This is the road the Schreckhises live on - they are smack dab in the middle of the jungle, green everywhere! 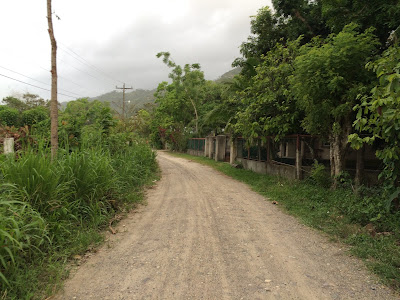 After dinner we sat around the table playing games... 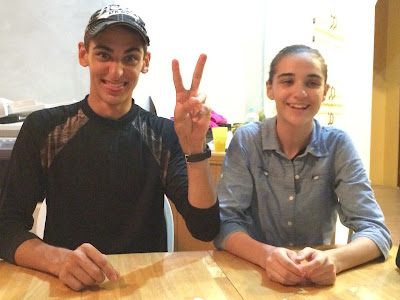 We ended a day of fun with a few games of spoons. 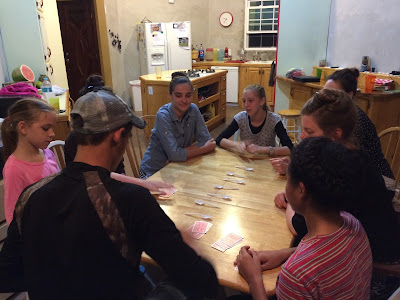 Such a great day!
~Bethany~

We woke up Tuesday morning to a delicious breakfast - two things really stood out to me. Bro. Schreckhise has some kind of secret recipe to scrambled eggs - the eggs from the chickens out back. I have never had scrambled eggs that were so tasty, and honestly just impressive. Then Sis. Schreckhise made banana muffins; they were out of this world!! We also had cantaloupe and mango. Everything was so satisfying and delicious. 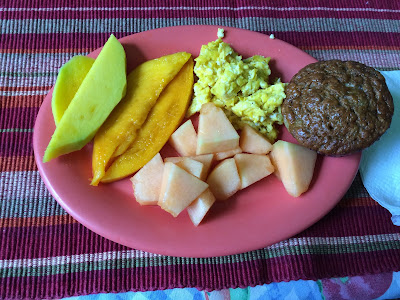 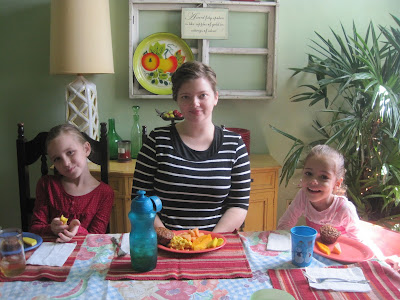 Charity informed me that she likes to chew the muffin papers. Get every bit of banana yumminess off of them! I thought she was joking... 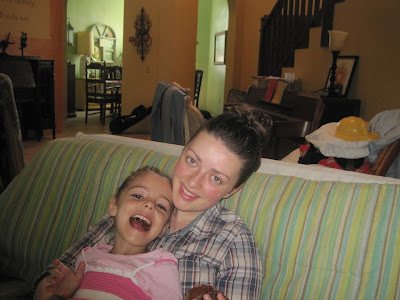 After breakfast we went out for a little site-seeing.
We site-saw past the river that a bunch of the Schreckhise kids were baptized in. It was beautiful! 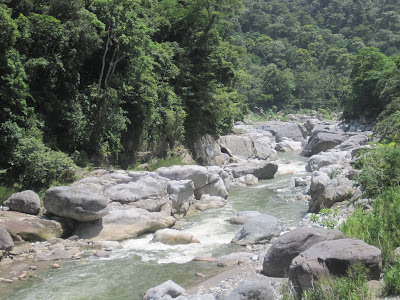 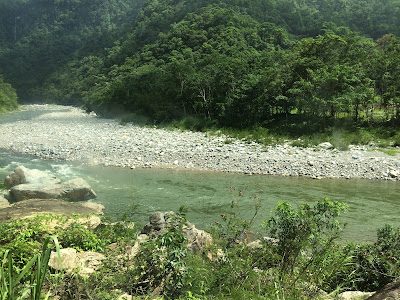 We arrived at the next stop - what turned out to be a test of our courage and bravery. We were going to be walking a suspension bridge that crossed over the river below. 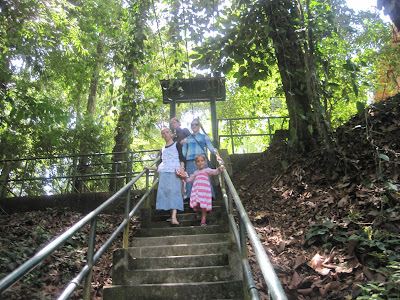 The night ended with me soaking my feet in ice water. The perfect solution to a very large situation I was having. Hahahahha! :D 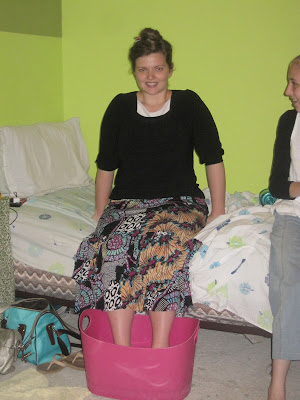 Our fourth day in Honduras was pretty full, but in a relaxed sort of way. It was Sunday and it started out with the power going out very early in the morning. I feel like the main topic in these past few posts has been the heat, but it actually was a main part - lol!  Anyways, moving air makes all the difference. I woke up at around 4am and I couldn't breath, I felt like I was suffocating. In my haze of sleepiness I didn't realize the electric fans had quit working, but had to sit up and use my hand-held fan on and off for about half an hour until I was able to fall back asleep. We all woke up again at 6am for morning prayer. The electricity came back on a few hours later - in time for the main shebang! Sunday was the jubilee service. All the daughter work churches came together for one big service - children, young people, and adults.

Mom very accurately stated, "The devil isn't the adversary of my soul. The HEAT is."
Can I get an amen??! 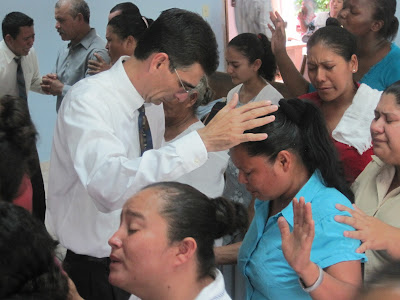 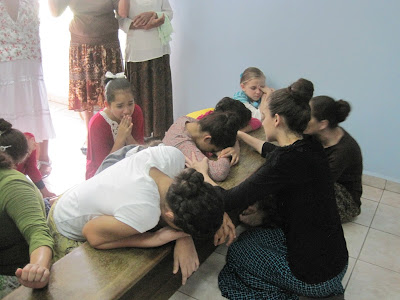 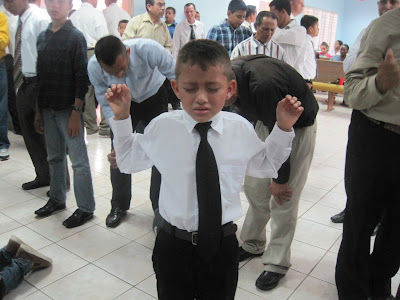 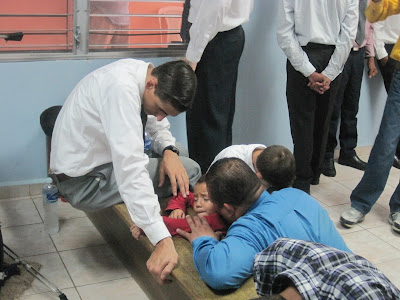 At one point during altar call, Charity got tossed over to the platform side of the altar - I'm guessing because a crowded altar wasn't the safest place for tiny little Charity to be.
She sat down beside my dad.... 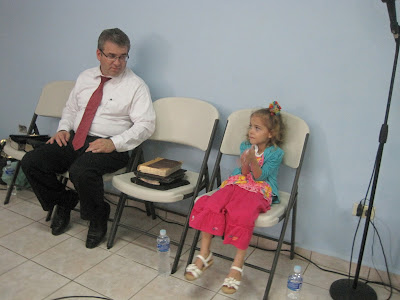 ....I saw them leaning together talking and wondered what in the world she was telling him. Later, Dad said she informed him that there was a man in the altar that had leaned forward, exposing his back. She wanted my dad to please go talk to him. HAHA. 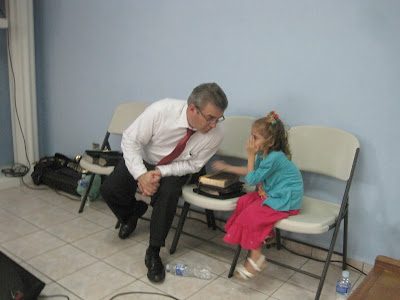 After service we went outside for lunch. Some of the Schreckhises and our family gathered a few chairs together in a circle. Once again, Charity sat next to my dad. 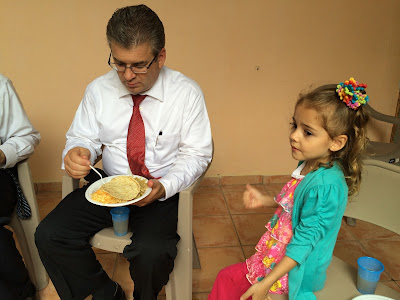 Pointing to this man, she said, "That man is from my church and he literally does not pray."
Nothing escapes Charity. She has her eye on everyone! 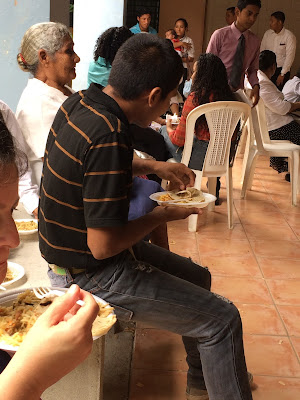 After lunch, everyone packed up and headed out.
We went back to the Schreckhise's home after camp ended.
At one point, Sis. Schreckhise mentioned that she was going to run outside to collect the eggs from the chickens. I'd never seen this done so I was excited to go out with her. 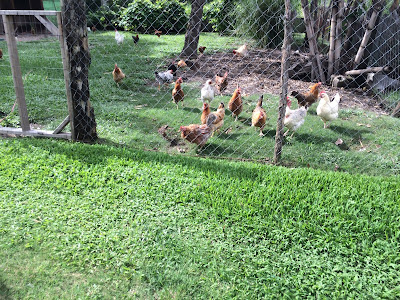 Later on in the day, we went to see the beach which is about one kilometer from the Schreckhise home. How perfectly providential!
For dinner we went out. I tried a pupusa for the first time! 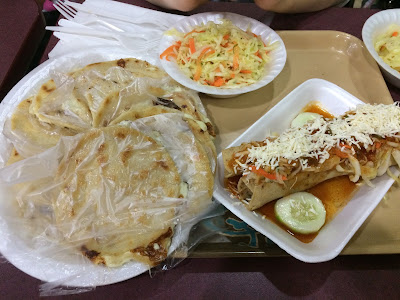 Another awesome day in the books!