Tuesday my dad/Bro. Wakefield got back from California. He had a gooood time with Bro. Shreckhise (sp?) and Bro. Joiner and we are soooo jealous! ;)
Also my dad brought back some of the goodies that were in his basket in his hotel room. Whoever made the chocolate covered macadamia nut things...WOW!! They were so yummy.

Here are some pictures from my 19th birthday on Oct. 7th.
We went out to eat at this place called Allegue. It was really good. More like American food.

This is the guy that cooked our food.
It looks like he's telling us to get out. 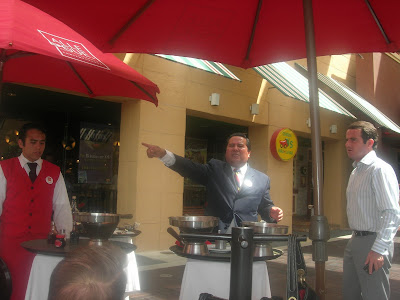 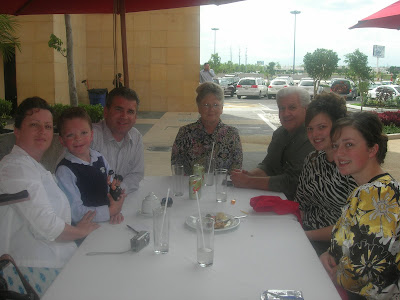 I just remembered what I forgot to post about last time. How could I? It was one of the most important things that happened this year.
I turned 19. Ha!
I have lots and lots of pictures of my birthday...but again I´m at this internet cafe on this slow computer so I can´t post. Too bad. But I will when we hook up our own internet. And Sis. Kendrick, it WILL be a novel. Lol!
So today Dolores came and made us Pipian Rojo...Red Pipian. It was so good, too bad I can´t post a smell or a taste. You guys would never eat broccoli casserol again.
Tomorrow for dinner I´m going to make stuffed chilis. We´re going ALL Mexican. Forget boring American food. ;))
Oh, also my Gma and Gpa are in the States too. So it´s just us girls (and Austin) down here in Me-hee-co. Are we "lonesome tonight"? As long as the people from church keep coming over, no. Tonight we had some more people over because Nicole made a cake. We sat around and laughed and visited...it was fun.
In other news:
Ranger has now become an outside dog. Poor baby has just can´t control his bladder. Or really likes the rugs. So I wake up every morning to the birds yelling to be let out and that dumb dog whining to be let in. I can´t win. What can I say? They love me.
...
Today we got news that we might be getting our road paved in these next few months. We don´t want to get our hopes up because this is not the first time they´ve said this...but I kinda can´t help it. No more dust! (Practically.)
Winter is coming. The rain is finally stopping. Everyone is saying that this winter is going to be super cold b/c it was ¨SO HOT!!¨ I´m sorry, but these people just don´t know what hot is. They´ve never been to Texas in July or...Belize! This weather is perfect...but anyways. Supposedly it´s going to be really cold for the rest of this year. I say BRING IT ON! I´ve unpacked my sweaters and coats. I´m ready.
...
I guess I should maybe post this on Austin´s blog but like I said, this computer is too slow.
So yesterday we were riding in the car and Austin yells from the back seat, ¨I need a pedicure on my hands!¨ We all laughed, but in the end he got his wish. Well, a manicure. He thought it would be funny to scratch Nicole in the face so her and I tied him down--with his seatbelt--and filed his fingers down to nubs. I have pictures of that too. He looks scared.
He came in my room the other day and my nail clippers were laying on my bed so he picked them up and started trying to do his nails. After a couple fingers he threw them down saying something about it being only girls being interested in that kind of stuff.

I know this is going to make Austin look like some kind of monster...but he deserves it.
Last night him and I were rough housing and he bit me! He´s never done this and believe me, he´ll never do it again. He gave me a bruise then learned what a ¨Charlie Horse¨ on your leg is.
Isn´t he just a cutie?
Well...I guess I´ll go. This whole not-having-my-private-computer thing has it´s downside. There´s a girl behind me eating a Pop Rocks sucker, and smacking her head off. I can only sacrifice so much.
at 6:48 PM 7 comments:

Wow...
I feel like I haven't been on a computer for a year. Lol. Really it's only been a week. I'm at an internet place and the keyboard is a Mexican one. It's annoying! The buttons are a little different. Anyways...
We've moved into the house. It's really weird living out here. Like to get to church we don't have to drive an hour, we just go downstairs. Also one of the best parts is that tomorrow Dolores (the girl I do Sunday school with) is coming over and she is going to make us a real Mexican dinner.
Bro. Curtis Wakefield/Dad/the family chauffer left on Saturday for California. He's preaching at Bro. Johnson's missions conference. My mom does not like to drive here so we are pretty much going to be home for the next ten days. In case anyone wants to come visit us. Haha! Actually today we are going to the market to buy some chicken and chiles and other stuff to make the Mexican food.
This computer is super slow so I can't post any pictures, but I'll try later.
I had this list in my head of things I had to blog about but now I'm drawing a blank.
Oh ya.
Last night we went over to Dolores' and them's house-haha. She asked us after church if we could come over to eat. We wanted to bring something...like food or a dessert, but the fridge is just about empty. So Nicole and I dropped by the store and bought a Coke and the boys picked out some chocolate brownie things and some cookies. I didn't know that the only thing to drink would be the Coke I was bringing (or water) and the people in my church practically WORSHIP coke. Lol!! They say it is their drug. Normally I don't drink caffiene, but I didn't want to seem picky or rude, so I drank it. It was good too! But sure enough, I was wide awake when I should have been conked out. So Nicole and I stayed up last drinking Chai and listening to Odyssey and Box 13. That's an Old Time Radio mystery show. It's SOO good!! Mostly at night...haha! So we played Uno...about 150 games. Then that got boring so we decided we wanted to play "Cheating Uno". Ha!! We've done it before , but I always feel so...unsatisfied. Like if I win, I can't gloat about it or feel good, but when the other person wins I think I should have one. But...like I said. We were bored and supposed to be using our "library voices". (Mom and Austin were on the other side of the house sleeping.)
Well...I haven't laughed so hard in all my life. Nicole would try to sneak and throw cards behind her, or shove them under the nearest box, whatever you had to do to get rid of your cards. It was so funny. My stomach muscles were aching.

Ok. Mom is saying it is time to go. This isn't even what I was planning on posting about. Random. Oh well. Next time!
at 11:48 AM 4 comments:

A Girl's Post--Bethany's Point of View

Well...
This is the last post that I'll be doing from this house. But I wanted to dedicate one post to what could possibly have been one of the best friends I've ever had.
I've loved having my own personal bathroom. There's nothing like it. I'm already mourning over leaving it.

What I'll Miss About my Beloved Bathroom:
Not having to look at other people's toothpaste mess in the sink.
When it gets dirty you can't blame anybody but yourself.
There is always an open shower.
For people that like to look in the mirror when they floss...well no more splatters, if you know what I mean.
You can take as long as you want doing your hair...and re-doing it.
You can put your headbands wherever you want w/o worrying about them getting broken.
No more having to kick dirty clothes aside after someone doesn't put theirs in the basket.
Hair in the drain. 'Nuff said.
There's not a crowd on Sunday mornings.
No soap globs all over the sink.

Yep.
My bathroom has been good to me these past couple of months, but it's time to move on.
Well, the trailer is all packed up with our stuff so it's time to go.
I might not be able to post for a little while b/c we don't have internet hooked up out there, but I might be able to figure something out. Don't want to go into blog withdrawal.
at 9:20 AM 4 comments: