We were at Wal-Mart the other day and they had a deodorant sample display. 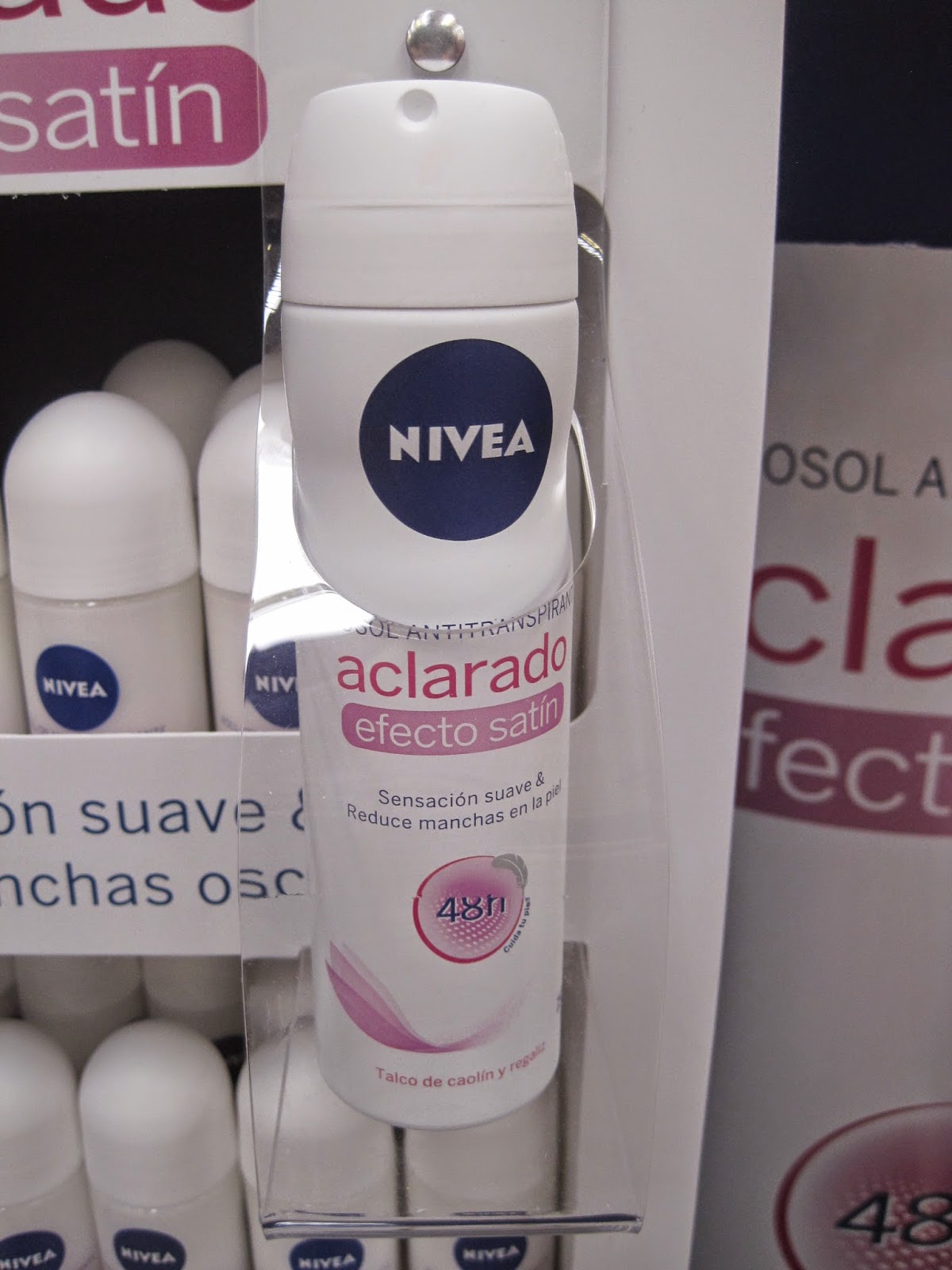 This is wrong, so very wrong. 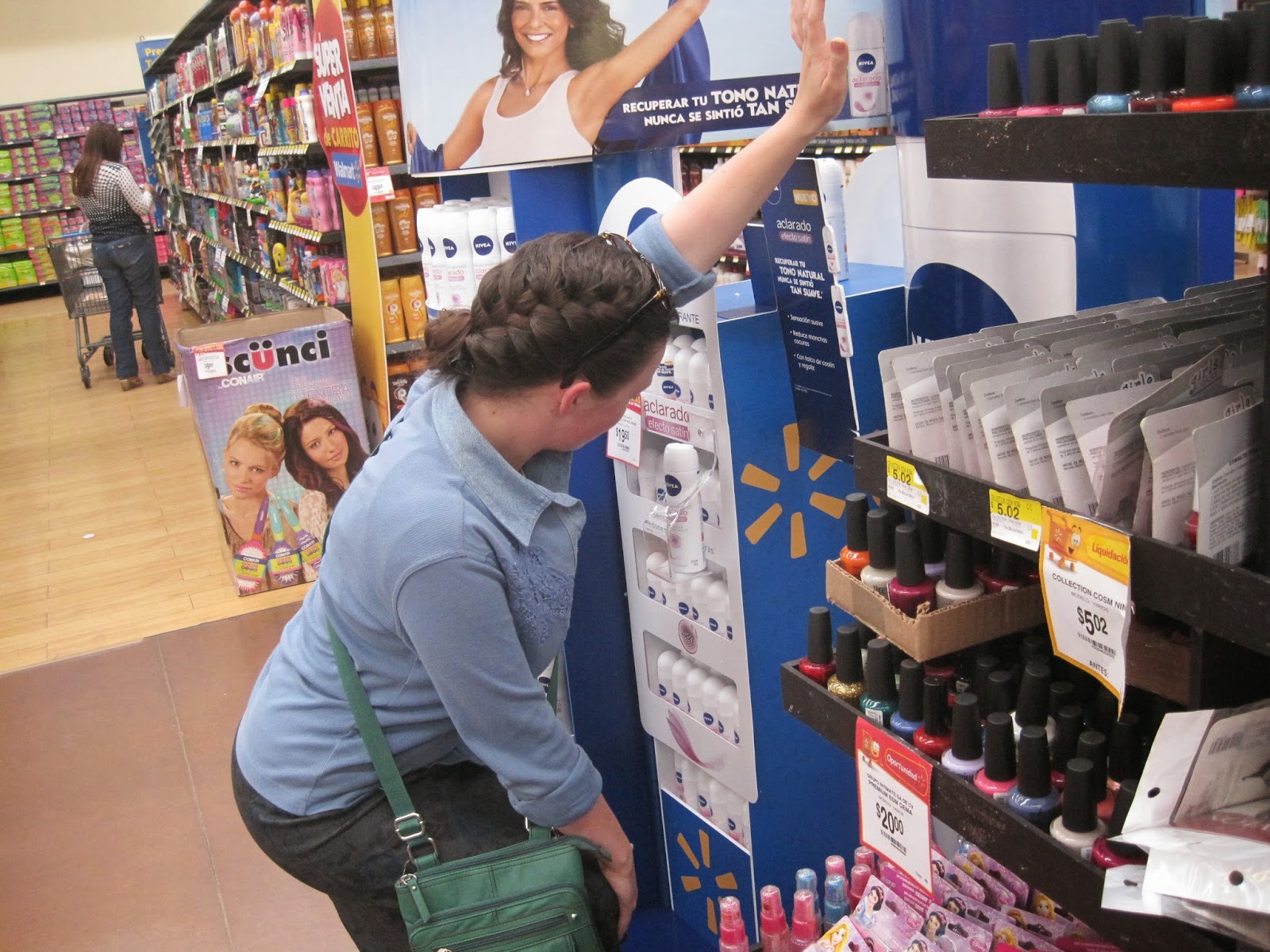 How is this supposed to work? Unless you were wearing a sleeveless shirt...
~Bethany~

Austin's & the Newlyweds Get Baptized! 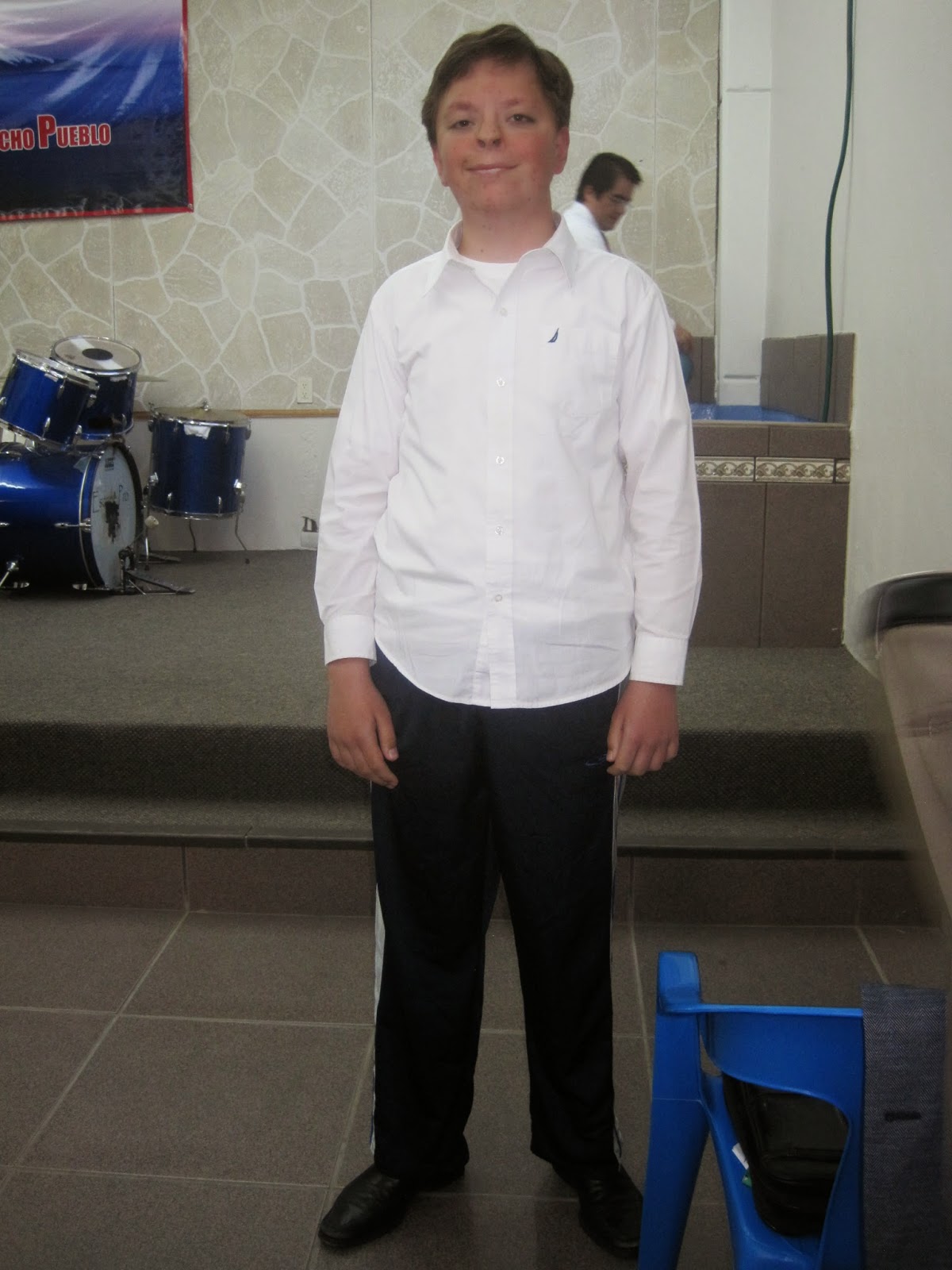 He had been wanting to be baptized for quite a while, but things always seemed to be getting in the way! Trips out of the country, dad traveling, etc... 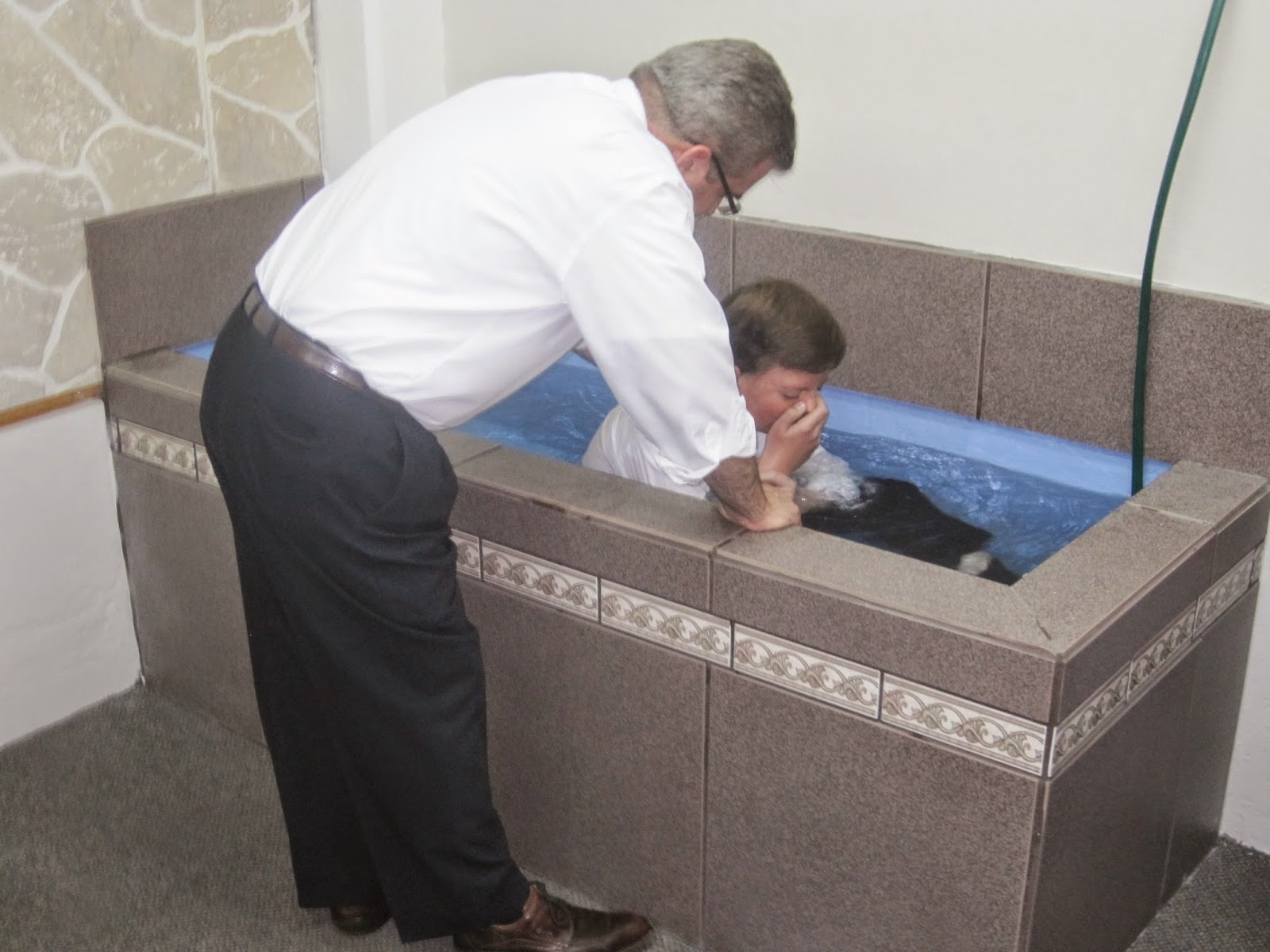 We are so happy to finally be able to call him "brother"!! (Spiritually of course :)

The next people that were baptized are a young married couple that have been coming to church
for a few years. 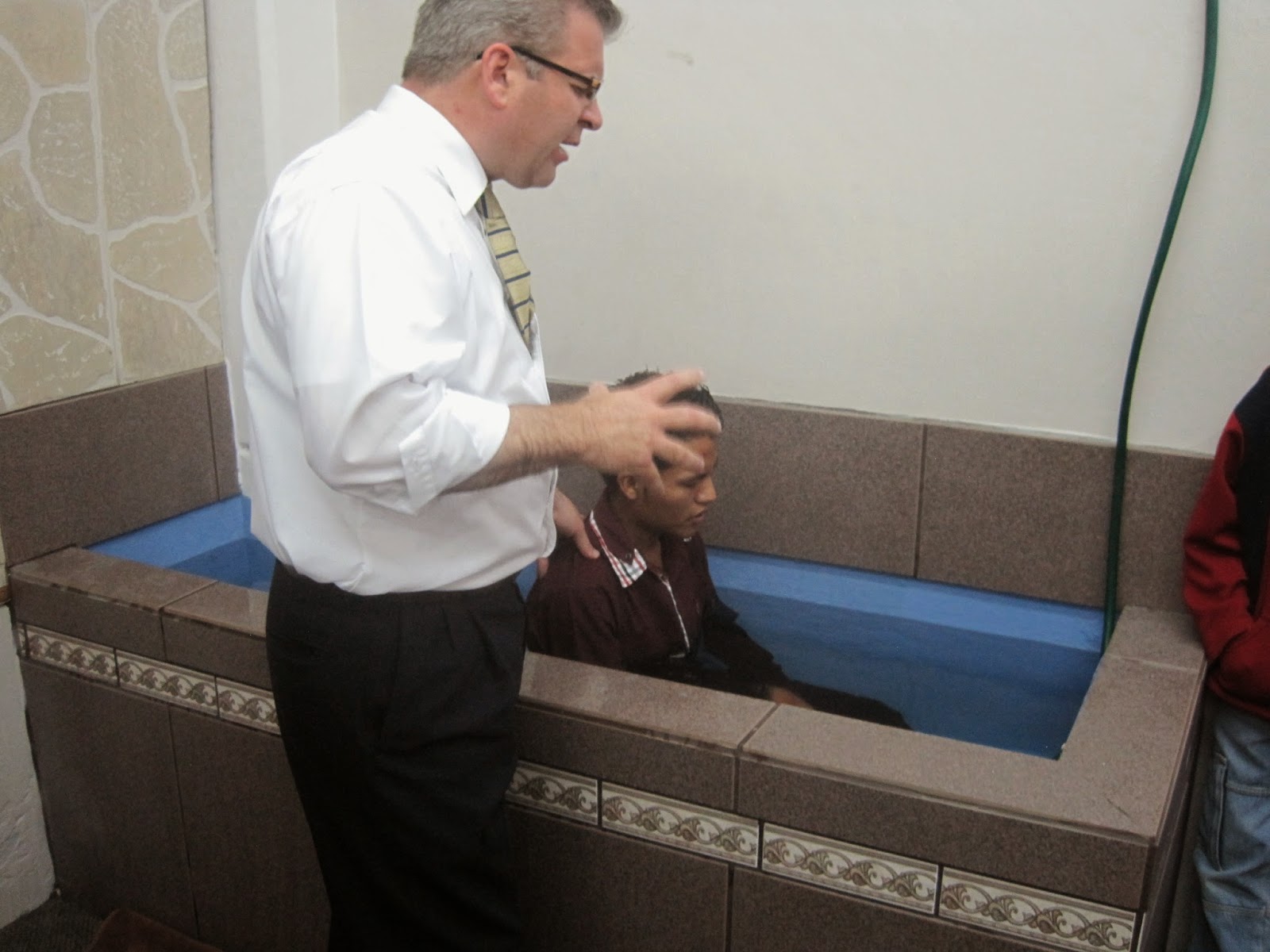 Bethany was really proud of this picture that she took because it looks like Pastor has a good grip on this guy's head when actually he is not even touching him.

This is Armando's wife Lorena. She sure has changed so much in the past few years. Her and her family started coming to our church in 2010 and she was one of those teenagers that made it really obvious to everyone that she did NOT want to be there! But  recently she has had a change of heart and just a month or so ago we were surprised and happy to see her up in the altar crying and praying! 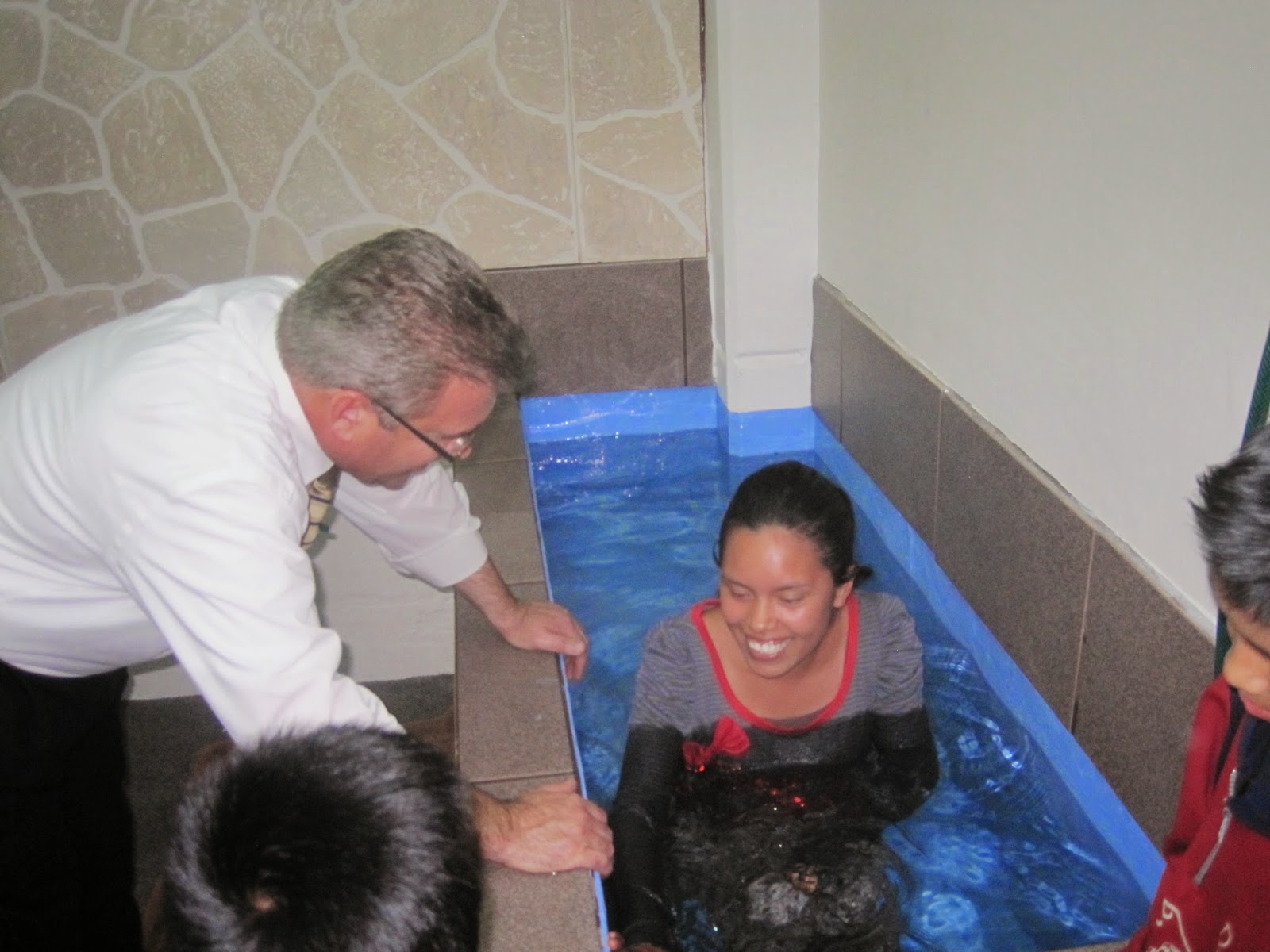 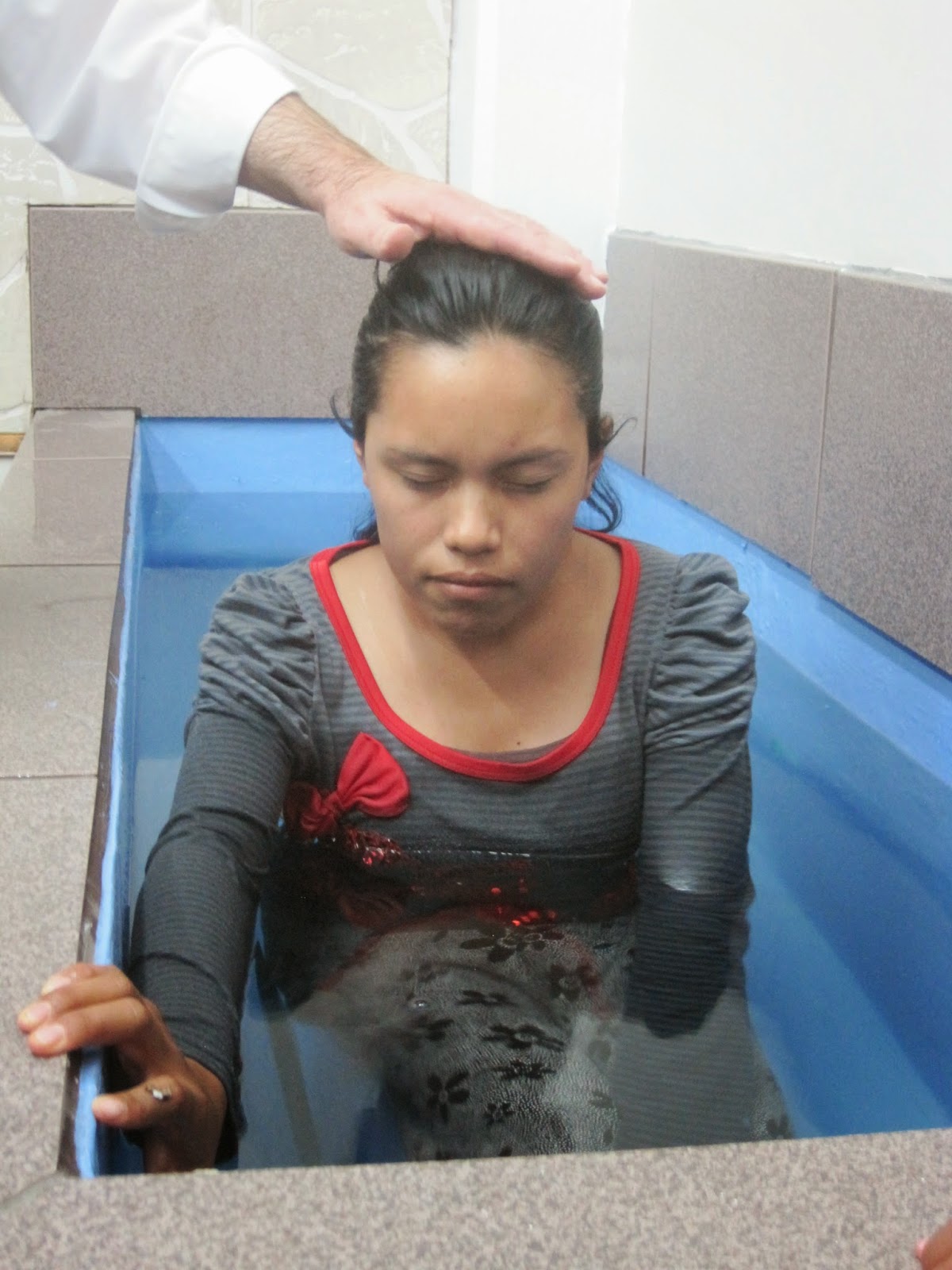 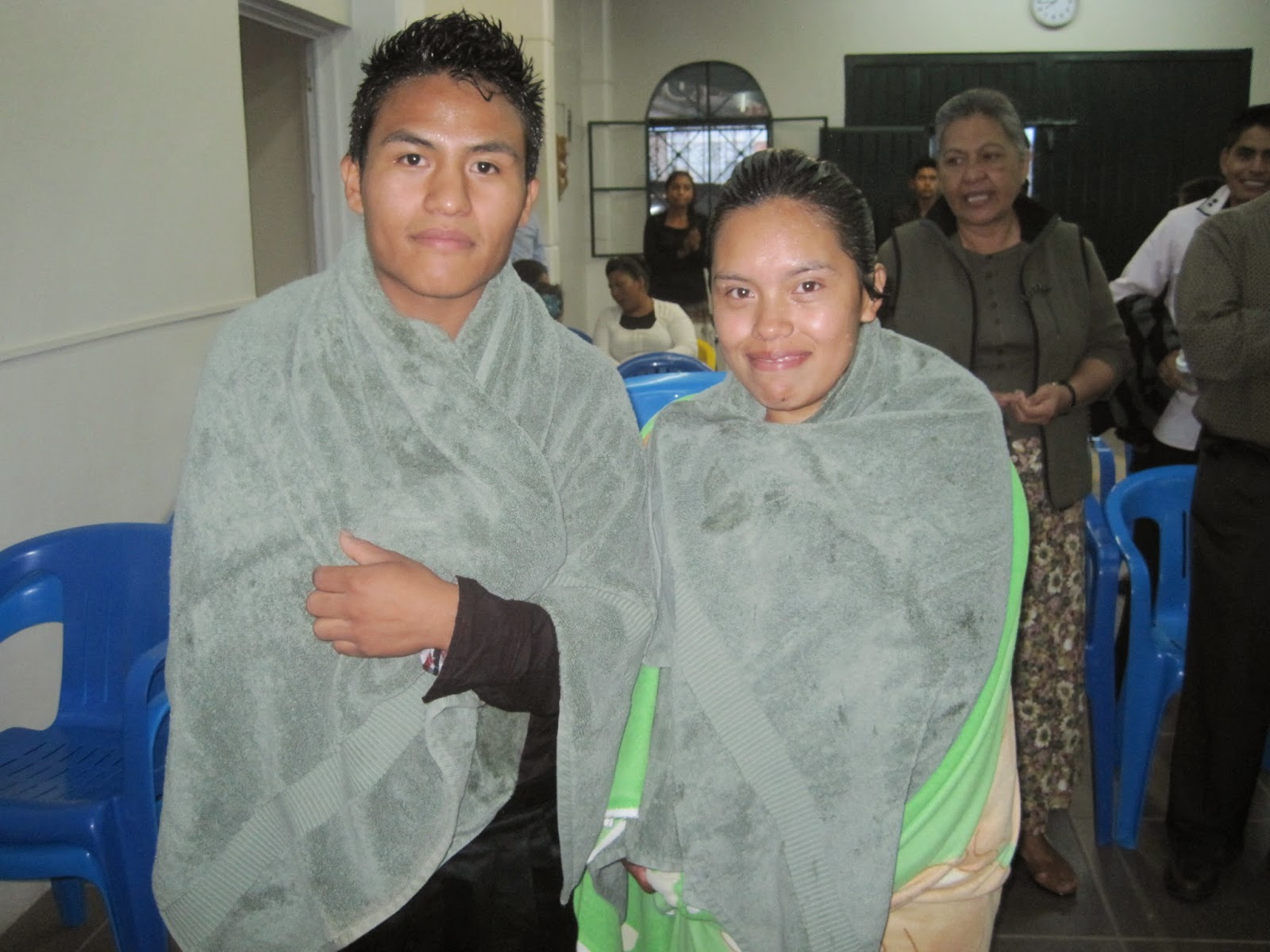 Here is pastor asking if anyone else wanted to be baptized! 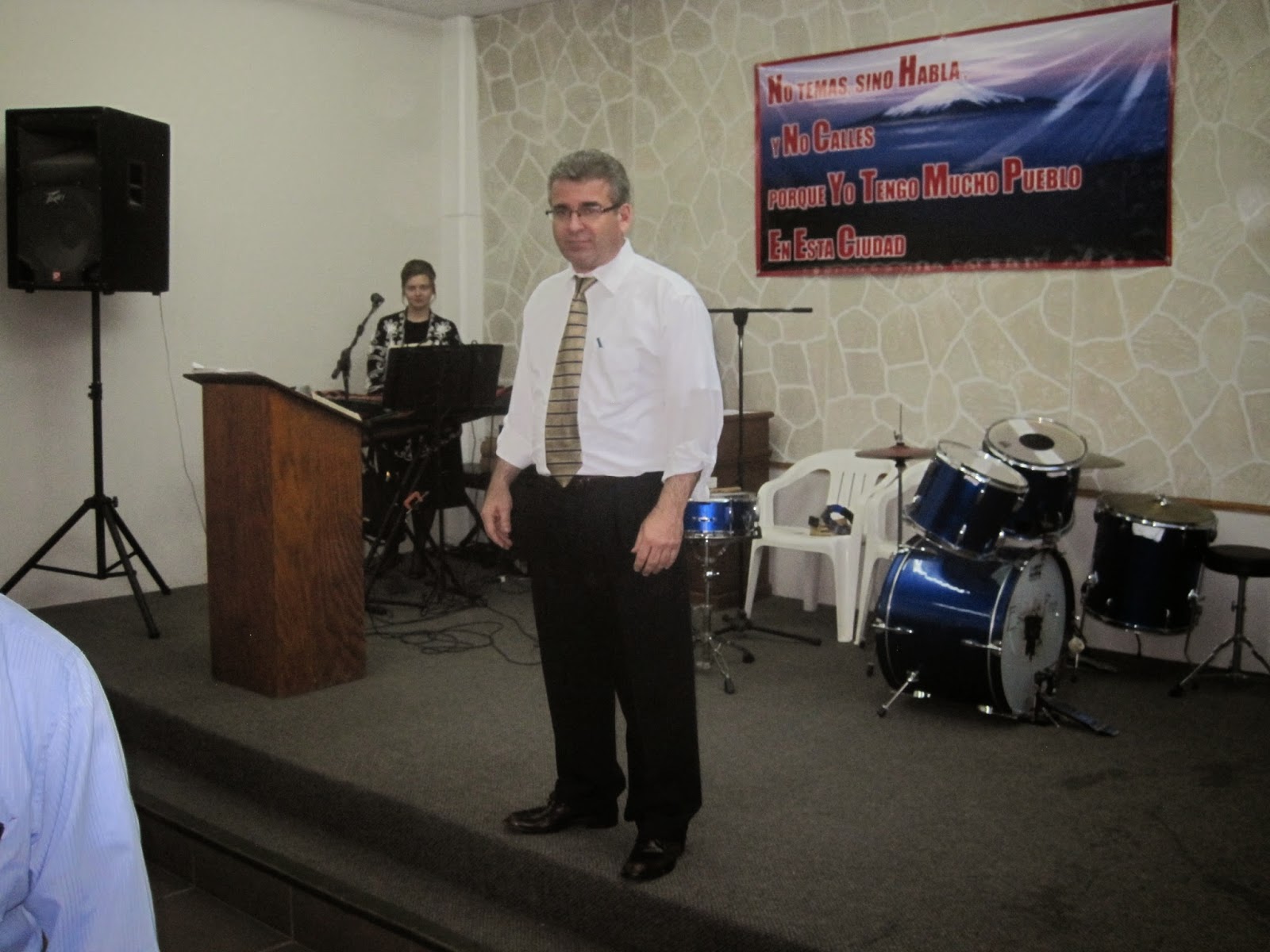 Speak now or forever hold your peace.... that baptistry takes forever and a day to fill up! Especially when its a last minute decision and we all have to grab buckets and fill 'er up! --We have had to do that in recent days...(blog post coming soon).

Our crazy dog, Jack, peeking in to see whats going on! This dog has caused manyyy a disruption in our services! 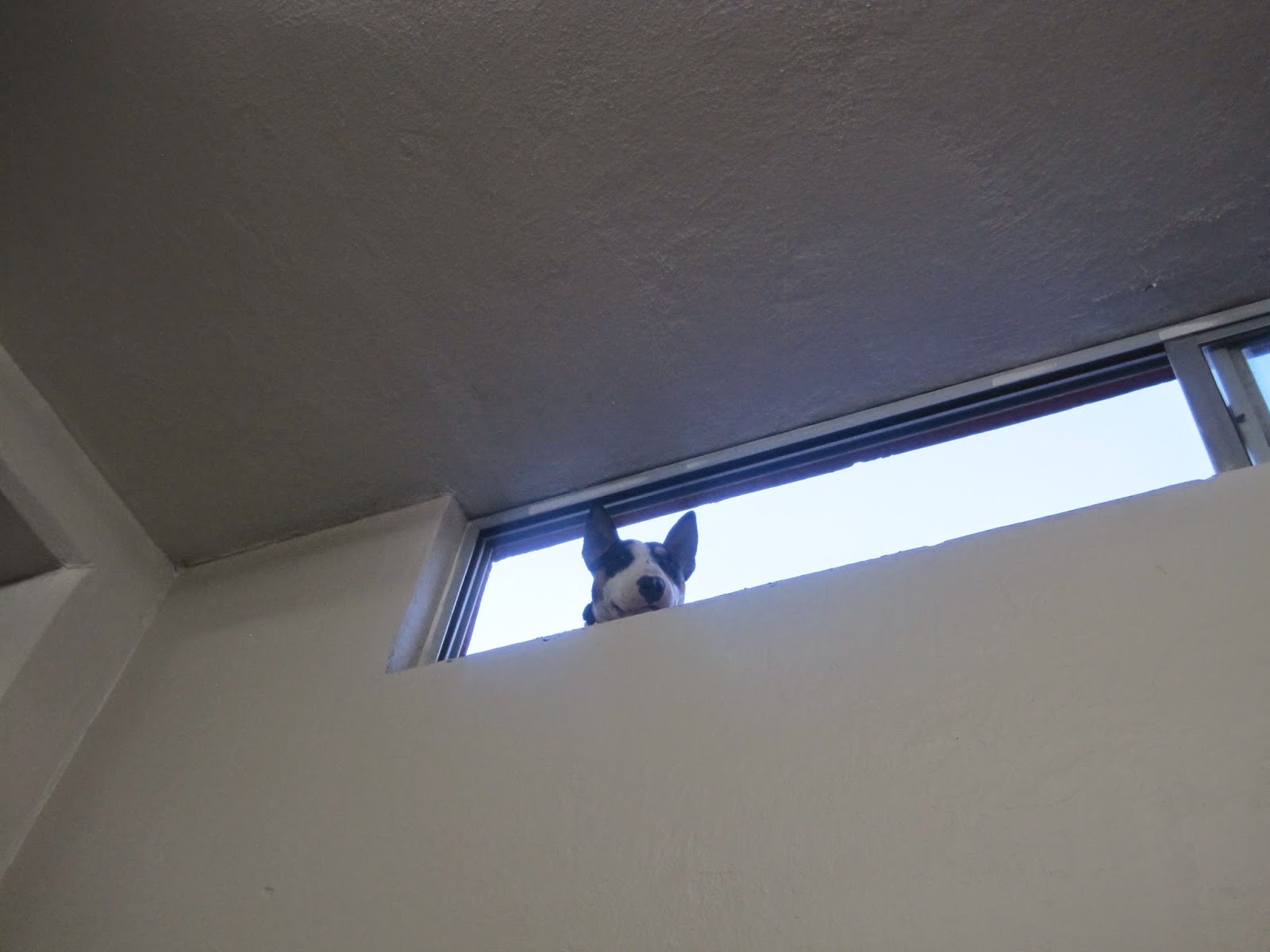 Thank God for what he is doing among our people!

Remember a couple weeks ago when we didn't blog for a whoooole week? That was because we took a little trip to Grampa and Gramma's house! They had been travelling in the US for the last 3 months and there were a few things that needed to be taken care of at their house before they got back. We also wanted to have a last shabang before the school year started back up. After church at our place on Sunday, we trekked our way across town and made it safely to our destination.


When we got there, we realized we had made a grave error.

Nicole forgot to leave a very important document in the hands of our trusted agent-mother for someone in the church. We couldn't imagine going back home so soon - that would have been very counterproductive. We put our noggins together and came to a brilliant conclusion - our other agent...Abner Garcia! Thank the Lord for friends that are there for you in your time of need. 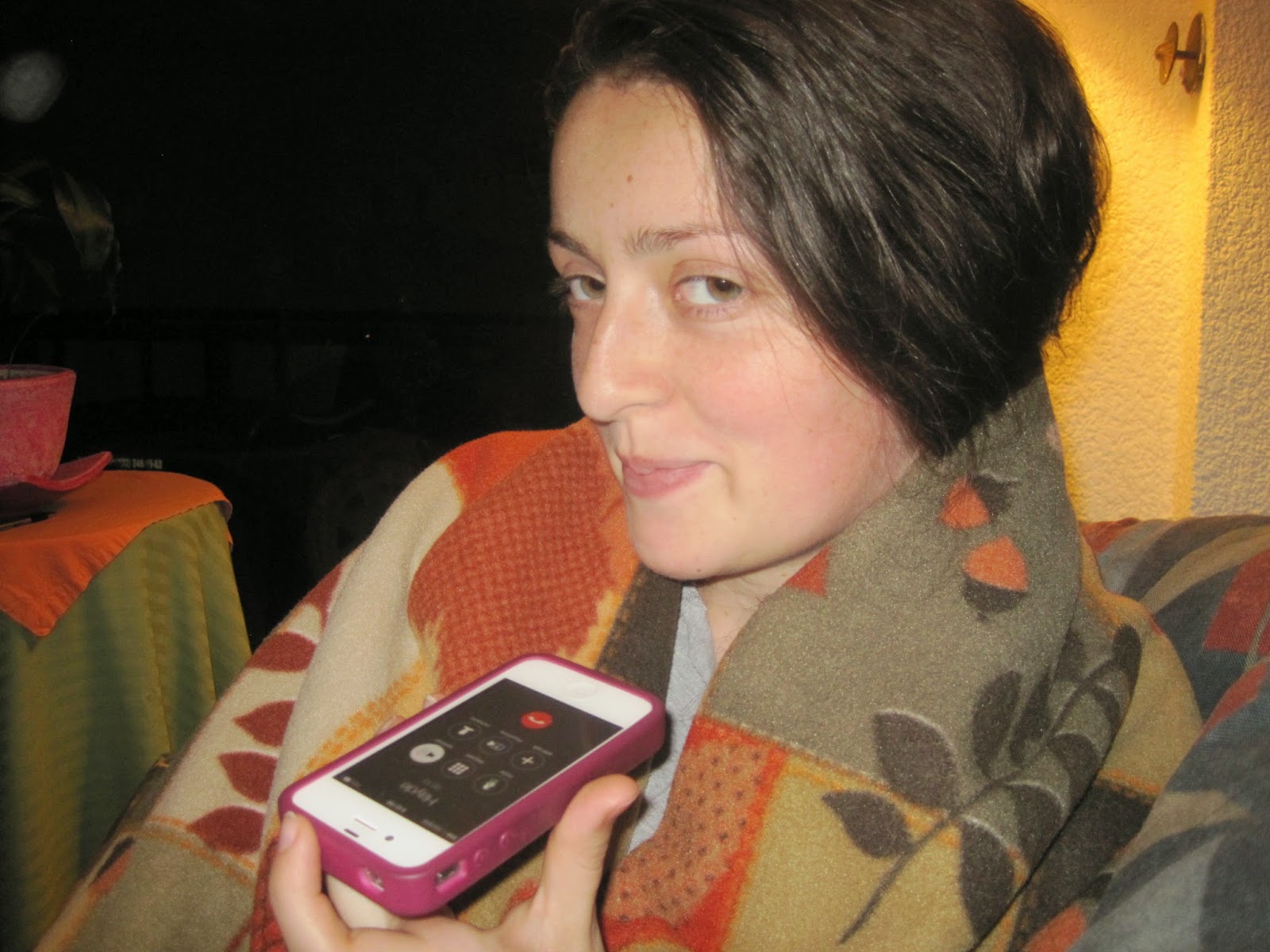 Nicole called him up and told him of our predicament while I was screaming laughing in the background. We told him that if he would come over the next day to pick up the document and take it back to our house, we would have a lemon pie ready for him when he got back. (We had seen a lemon pudding in the cupboard and a pie crust already made in the pantry so we figured this task would be pretty easy. And lemon pie is Abner's favorite).
We were so happy to get that taken care of. We then decided we should probably fill the tank of water on top of the house since no one had been there in 3 months. (The water situation is a little complicated, but basically there is a well that fills a cistern, then a pump takes the water from the cistern up to the roof, then it comes through the pipes.) I flipped the switch to get the party started, but it only made this "wa wa wa" sound. It was then and there I realized I was going to have to put my prairie skills to the test and PRIME THAT PUMP!!!


After this, we decided we'd better get to work on that lemon pie. 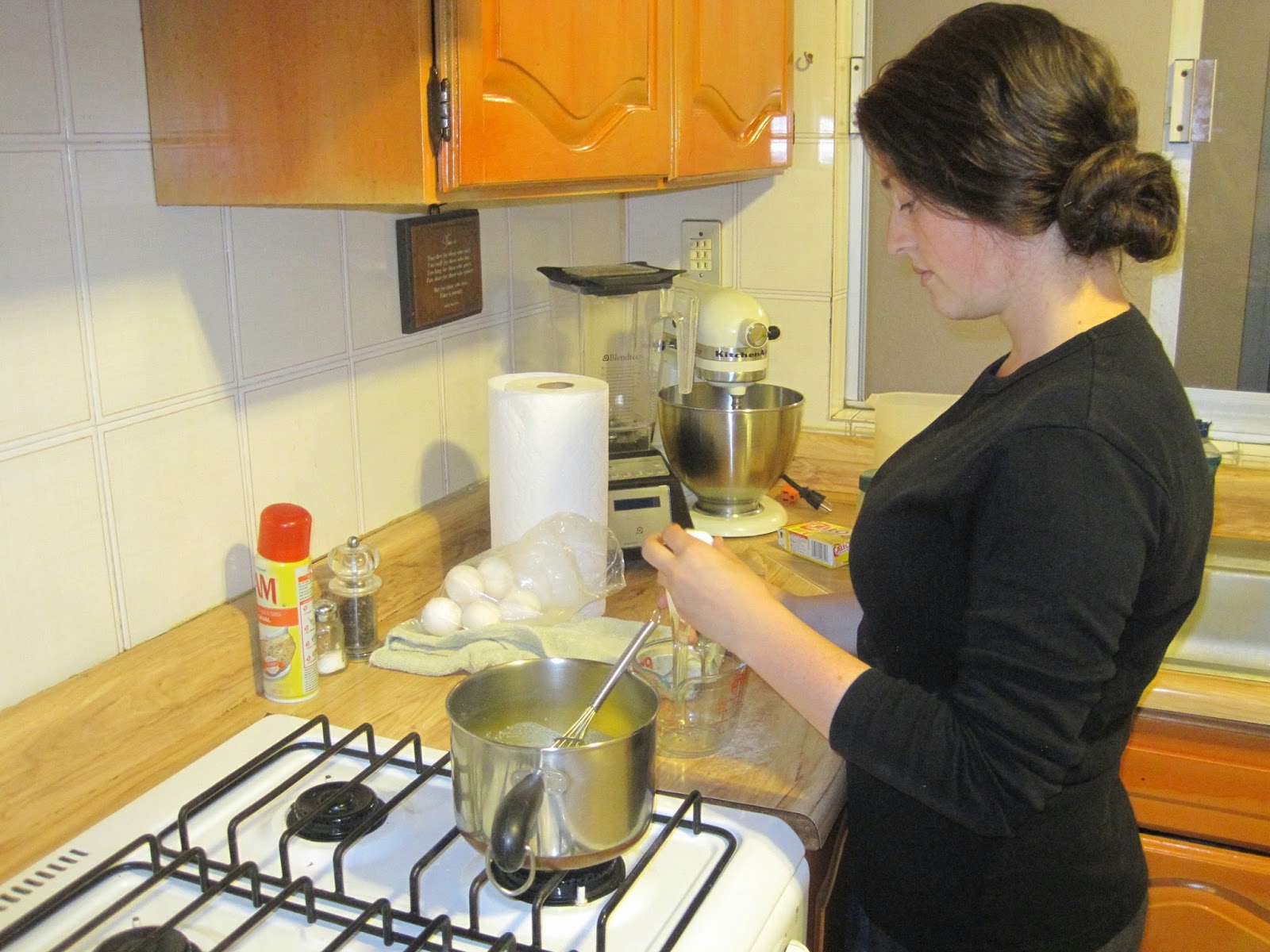 It was all supposed to be SO easy....
Believe it or not....I actually ended up having to make a pie crust....from scratch....with flour and shortening and all that... Our nice gesture ended up taking wayyyy longer than planned....but we sure did laugh a lot that night! 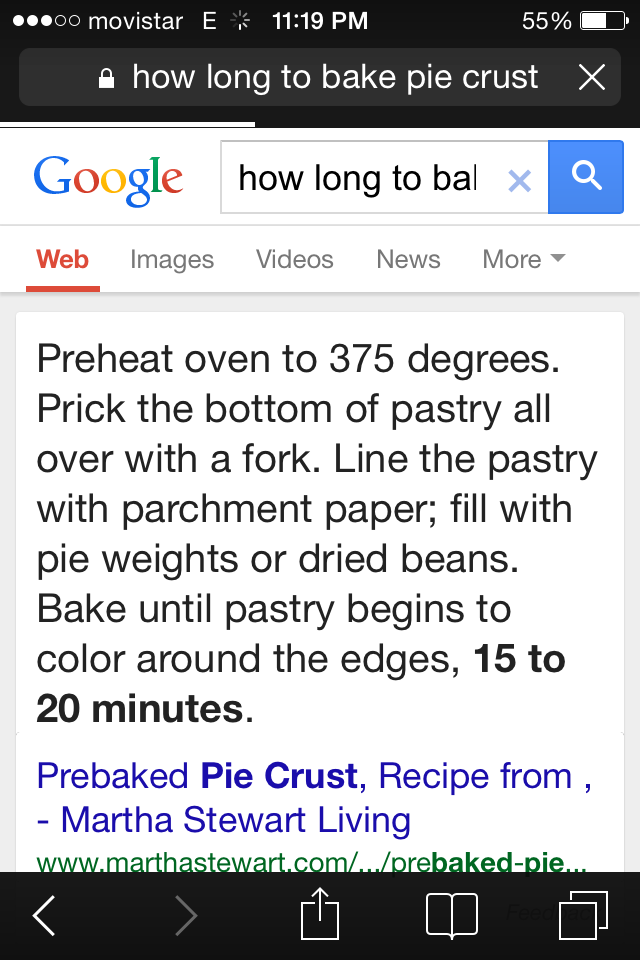 The next day, I made chicken divine and Nicole got this picture of the chicken boiling. If I remember correctly, her exact words were, "Oooh, look! It's a heart!" (I wonder who she was thinking about right then....) 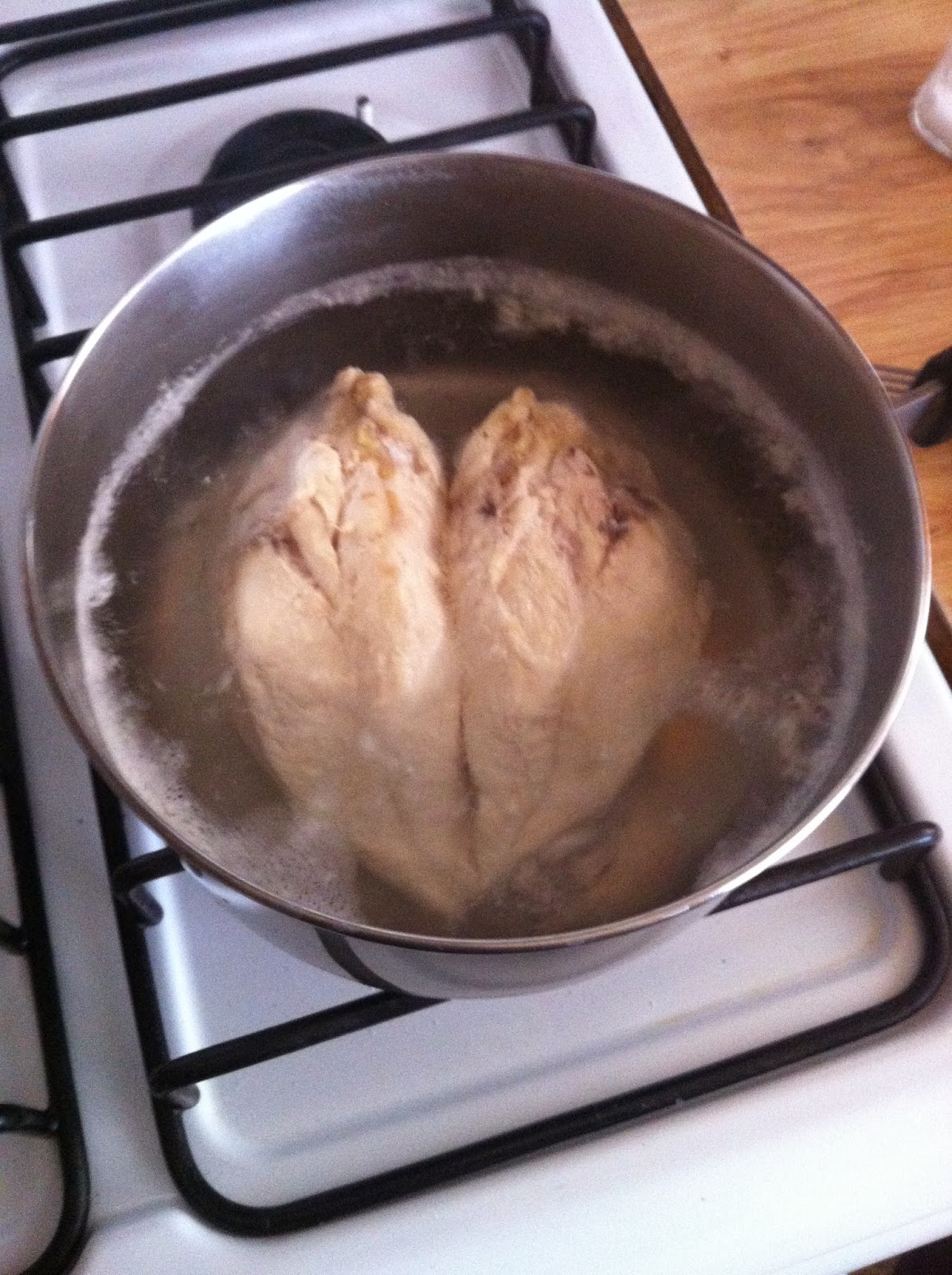 This is the arsenal provided to us, but I'm disappointed to say that the grass had grown a spine, roots, and had gotten rebellious. We had a fight on our hands and these tools were not cutting it...heh heh.


Here's the pile we accumulated with our bare hands. 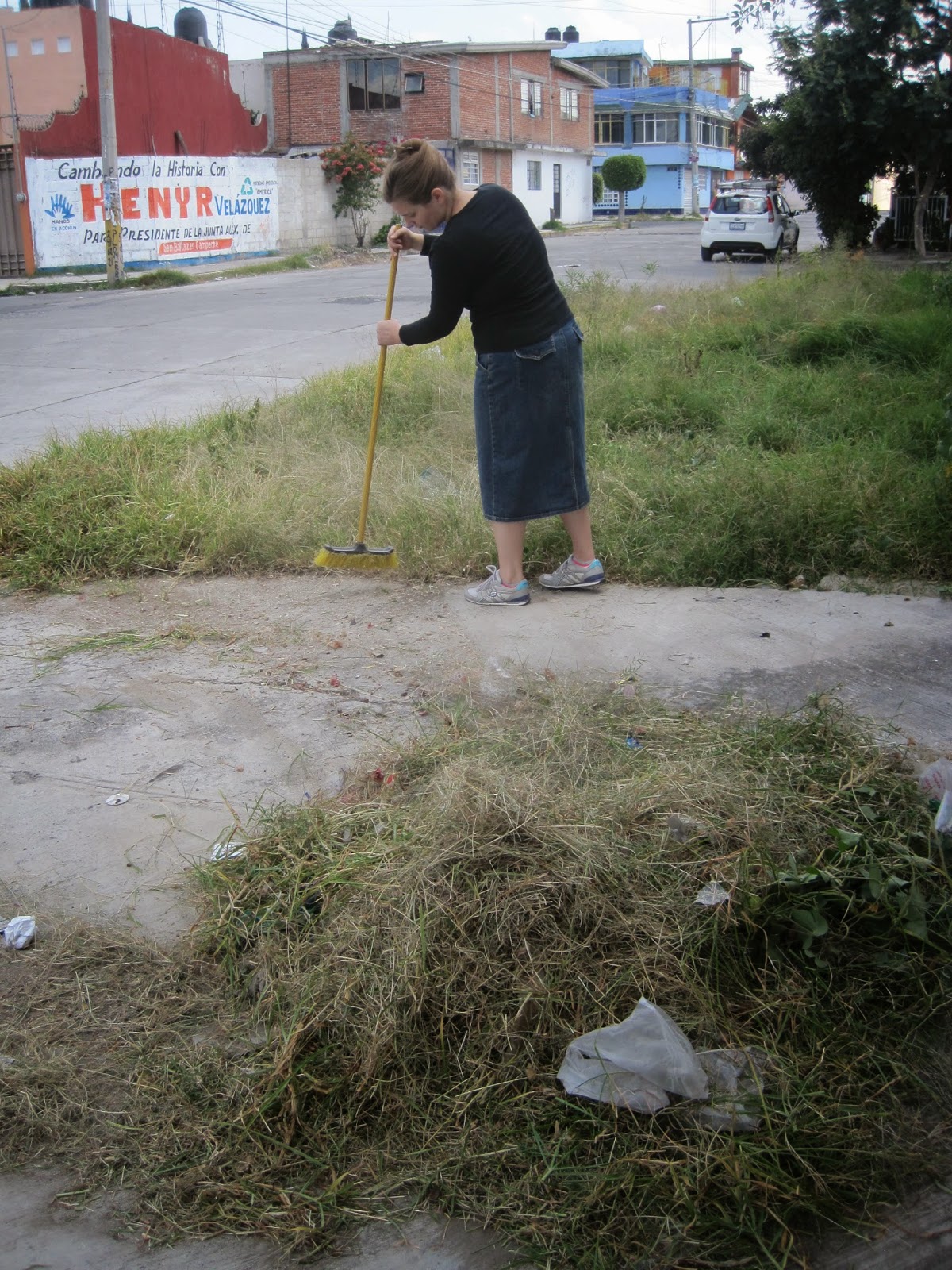 Yes, we had to resort to scissors. This is the end product. Looks like somethin' got a bad haircut.... 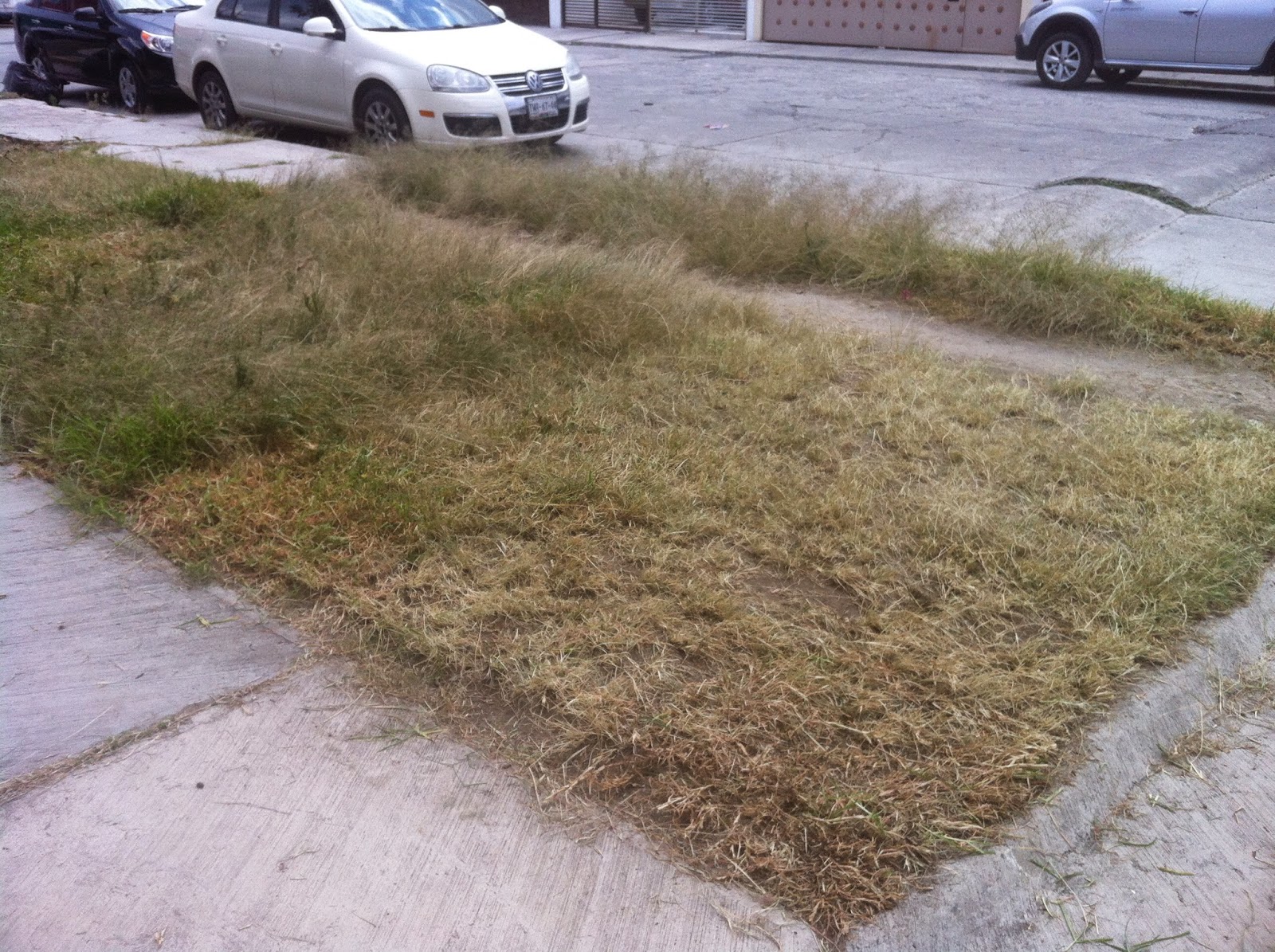 The next day, we were back to working the fields and gardens when I heard a noise outside. Nicole went and stuck her head out the door and saw an electrician disconnecting our electricity. She asked him why he would do such a thing and he replied, "Falta de pago." Somebody (Mr. Lemon Pie) forgot to pay the bill!!!! So if you wonder why the rest of these pictures are a little dark...........THAT IS WHY.

We went home afterwards and when we were going inside, I felt something fly by my ear. I ran inside so fast and slammed the door behind me. I caught a glimpse of this "little" guy fluttering around...

The last night, we went down the street and picked up some tacos for dinner and brought them back to the house to eat. 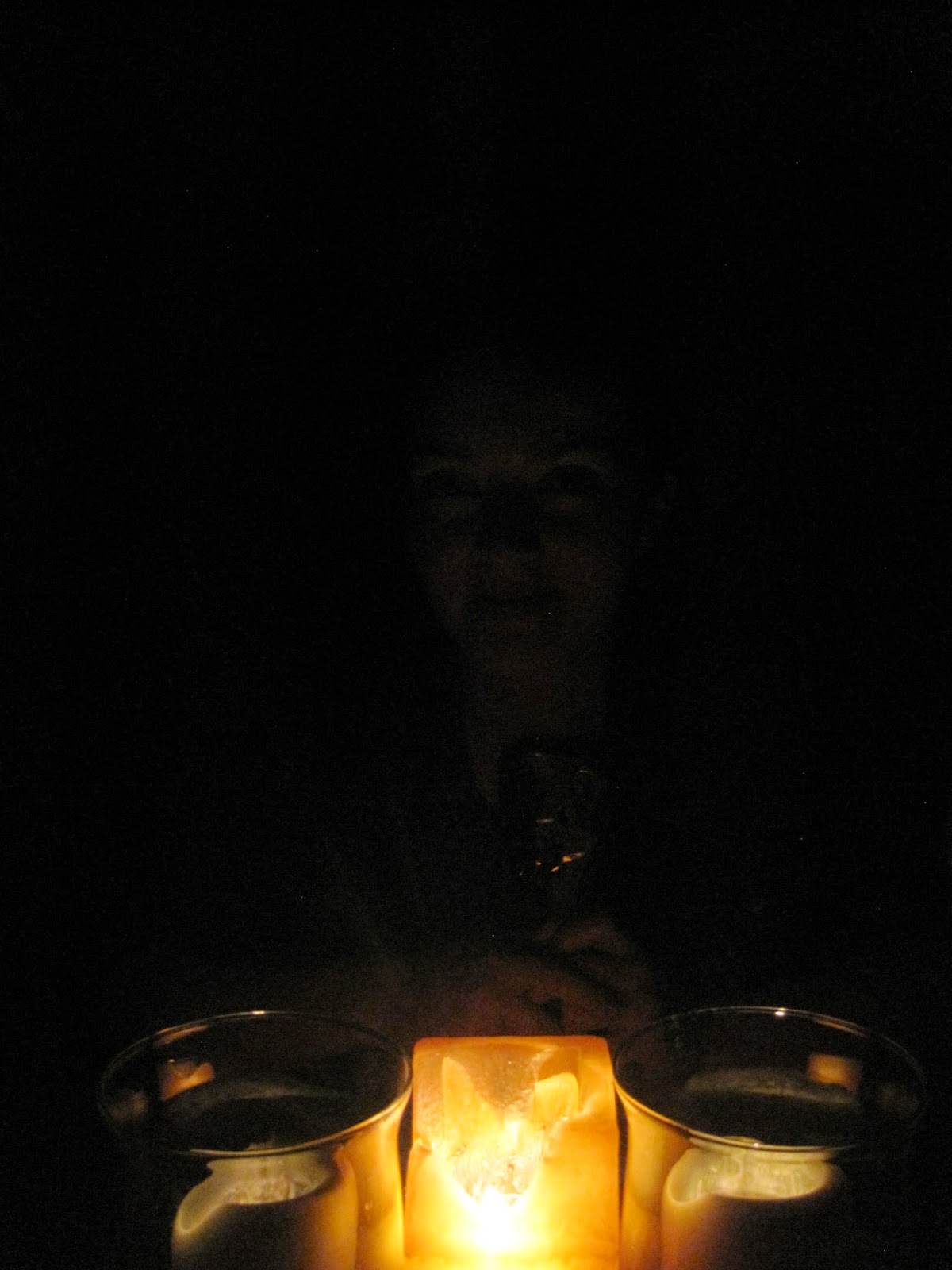 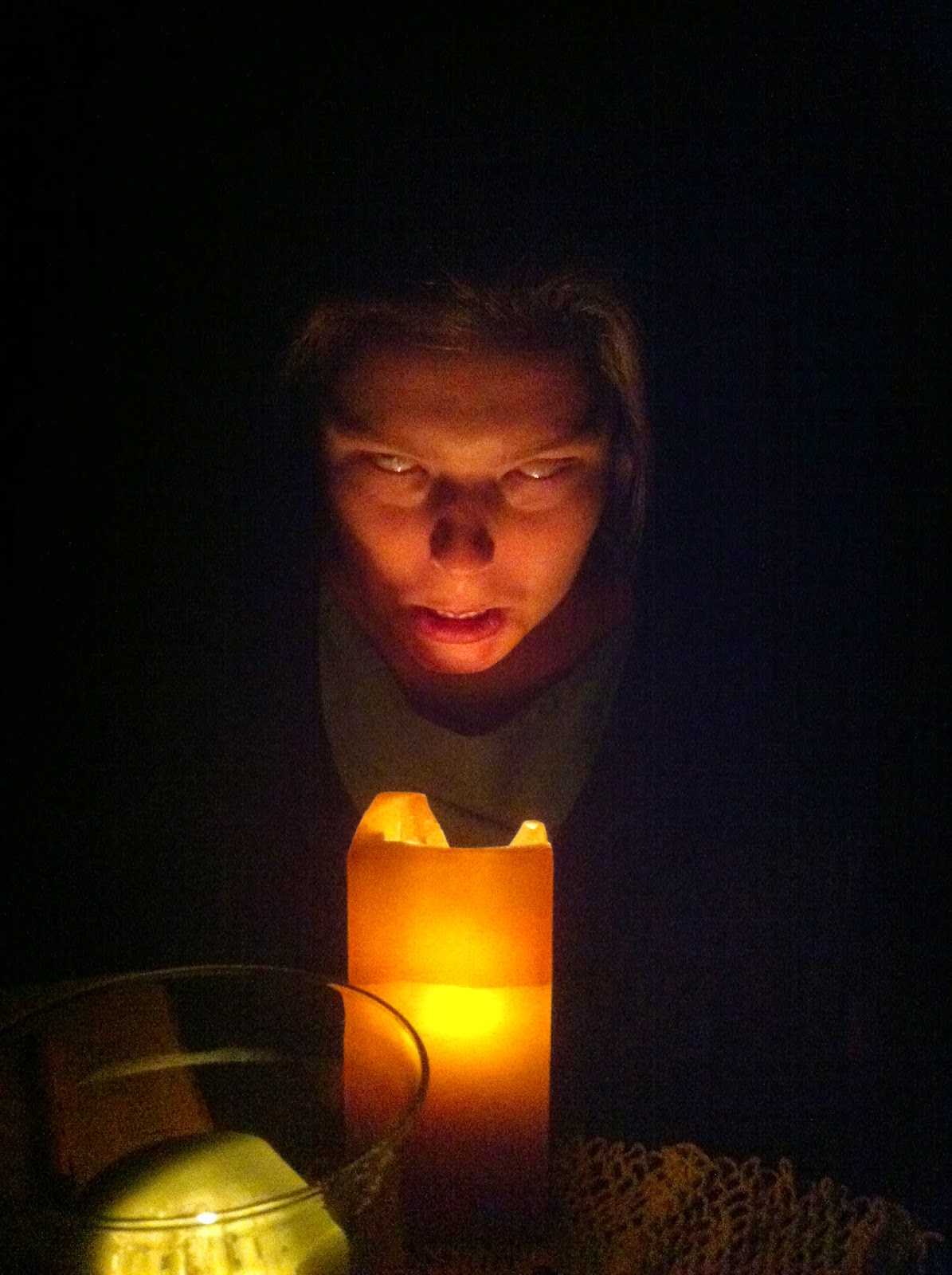 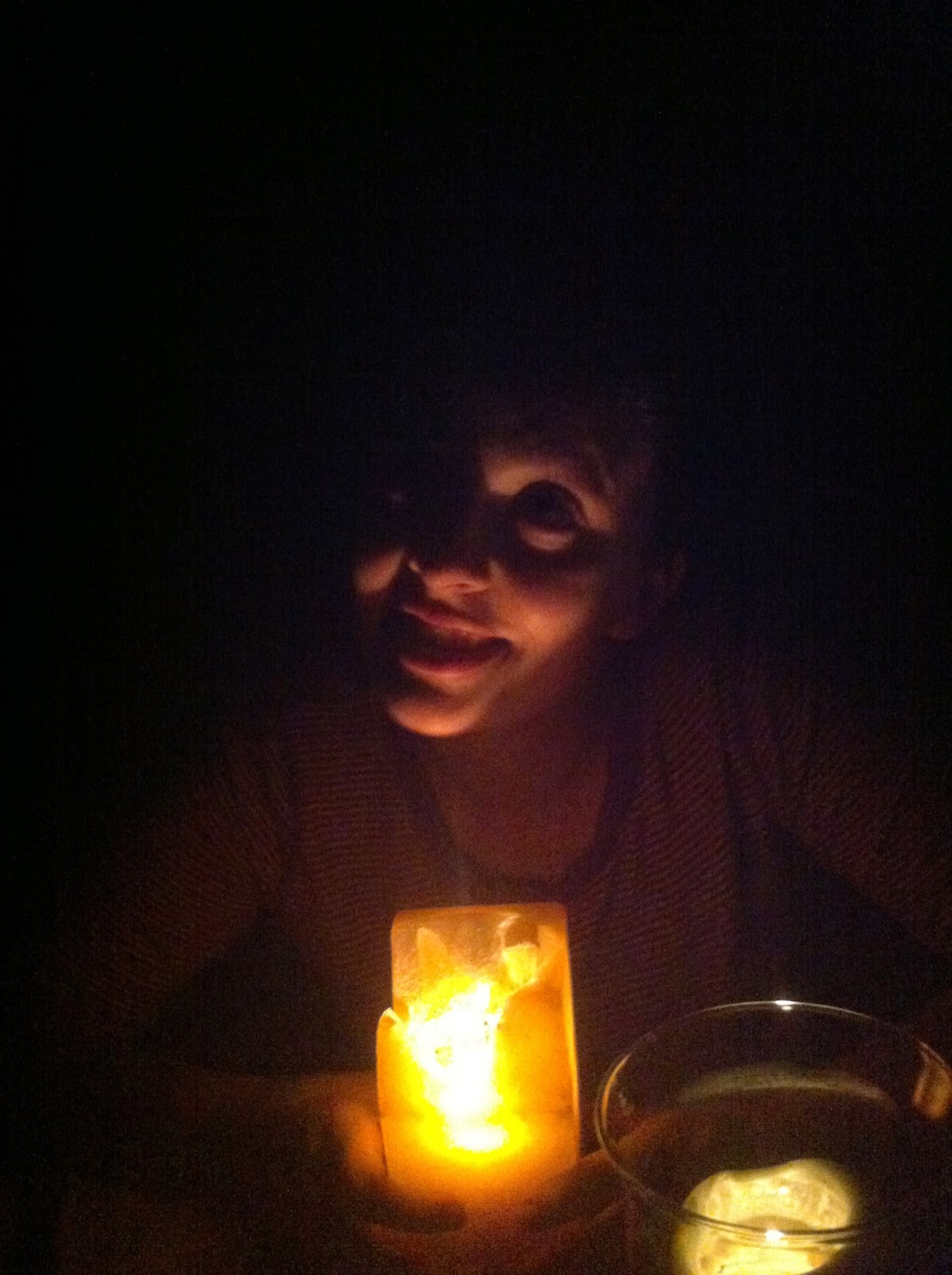 This quarter of Sunday school we've really been into puppets shows. I don't know how it is in the USA, but the kids and even the adults really really like puppets here. Last Sunday when the puppet show ended I heard one of our saints yell from the back, "Aww man! Don't leave!" Everyone is very entertained during puppet time.

I am the girl puppet, Sister Villanueva. Dad is the parrot, Cantor Jubiloso. Apparently we need to lift weights because after doing puppets for a few minutes, our arms feel like they are about to fall off!

The line of greasy products has expanded!
This time its in shampoo form, because we all know we need a little more grease up in our roots!
Smooth your locks with this 3 in 1... 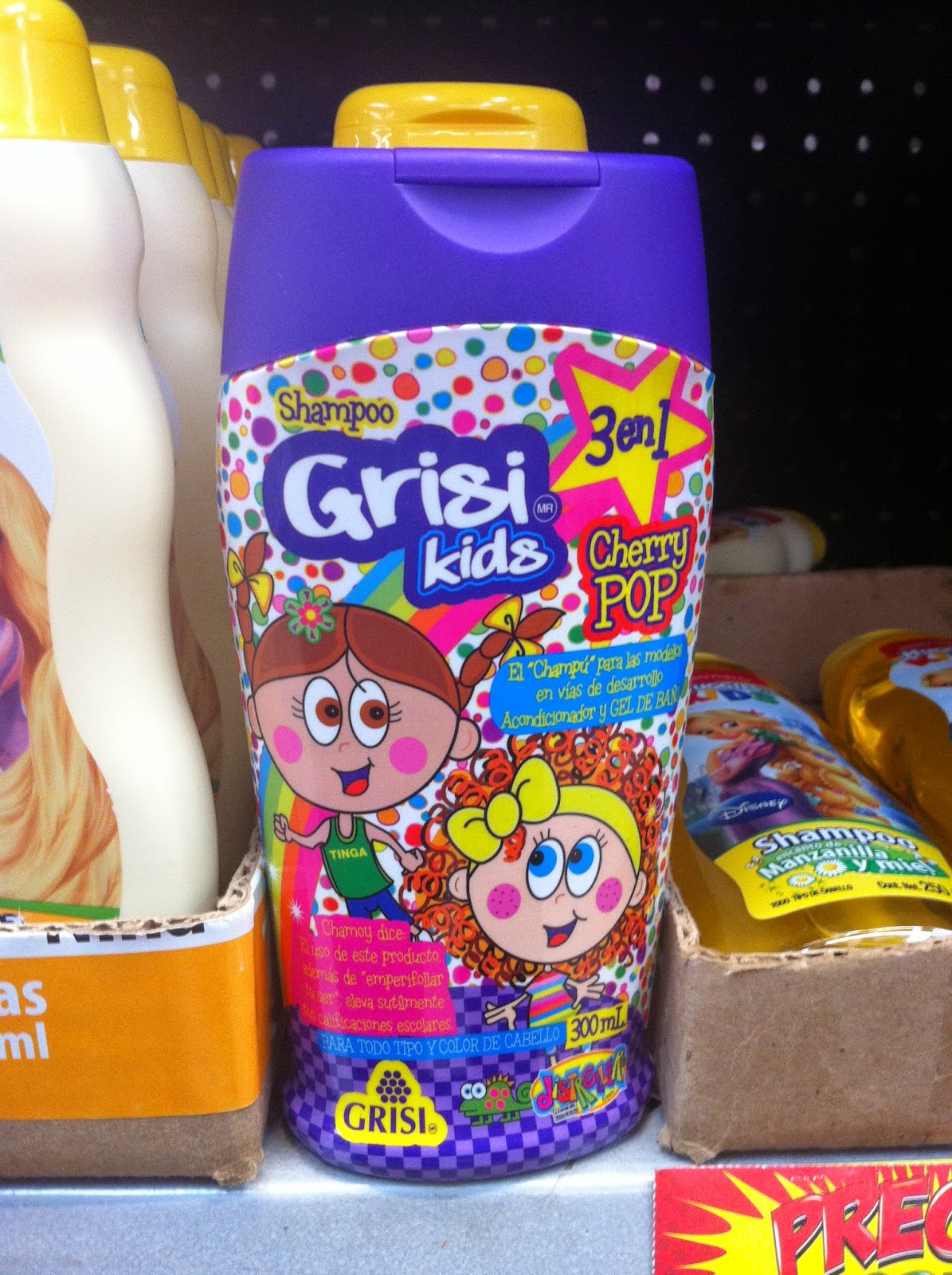 Maybe Wooten could use this for his slide! ...Oh wait.... Ooooops! Almost spilled the beans about the new odyssey! Heh heh :))

And hey guys! Guess who was your host for today??

At some point in this "celebration week", we wanted to do a list of what are the most memorable blog posts to us. So here goes!

Our first blog post ever: The Wilsons Visit Puebla

We have had a great time doing this blog. Sometimes we have a ton of stuff to say, and sometimes we only post about twice a month - ha! But one thing is for sure - we have a good time and we make ourselves laugh! It really is a stress reliever. Yesterday at the end of the school day Nicole and I were working on a post we will be putting up next week and could barely contain ourselves. We were laughing our heads off! Sometimes I wish we could actually narrate each picture with our voices, but it's probably a good thing we can't - lol!

On Sunday Ailyn, our most faithful little Sunday school student, brought her grandpa to church! 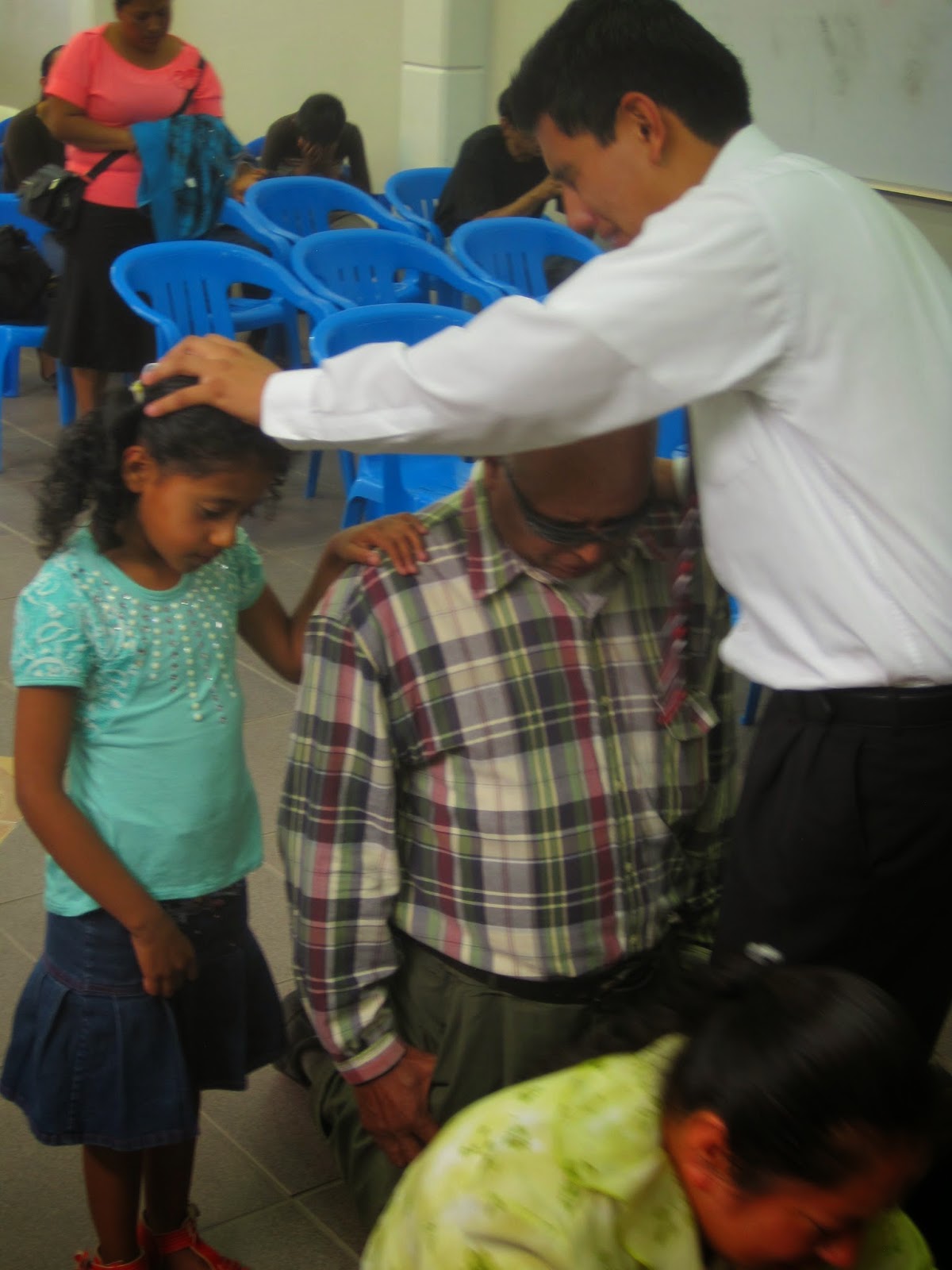 After the preaching, Ailyn grabbed his hand and brought him up to the altar. He knelt down and they both prayed for a good, long while. It was the sweetest thing!

I can't believe we are starting our third year of school! It doesn't seem like very long ago that we were just finding out that Mexico's law had changed and we could start a school. We are still setting up in the church, but it looks like we will be getting a school in the next year or so! Plans are in the works! 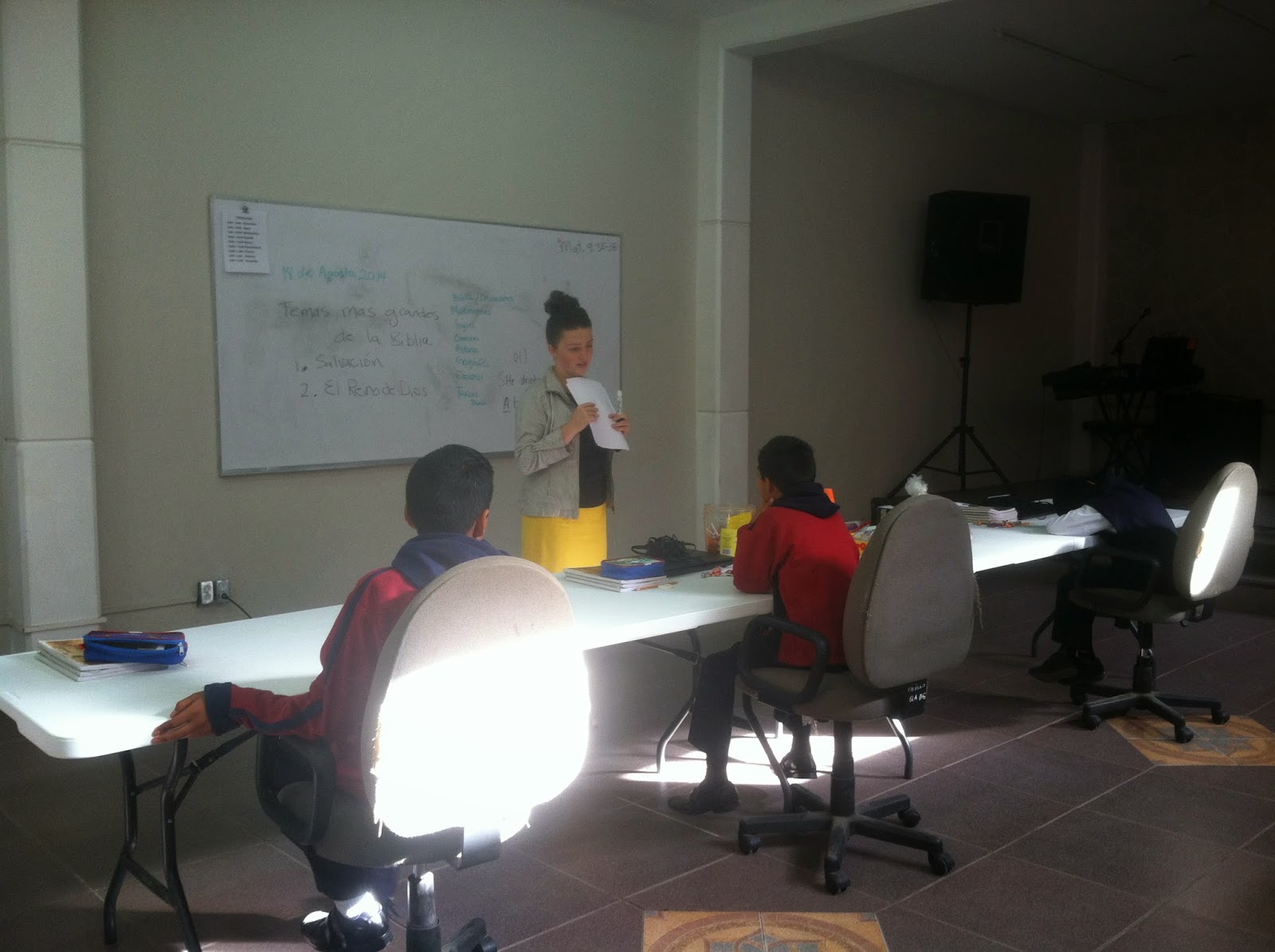 This is what is happening right now - Nicole teaching the first English lesson of the year. The kids are doing surprisingly well! It doesn't sound like they've forgotten much over the summer.

We have a lot of fun things planned for this school year and are looking forward to sharing it all on here. We had a great summer, but both Nicole and I are so so so relieved to be getting back to "normal life". Vacation is nice, but we have been missing the routine of school, and having a purpose in our day - lol! Also, fall is on it's way - allergy season is ending soon! Hallelujah!

Happy 5th blog anniversary to us!

Since it is Sunday, there is not much time to blog, but stay tuned! We will be celebrating here on the blog every day this week and will have something new up each day of the week. 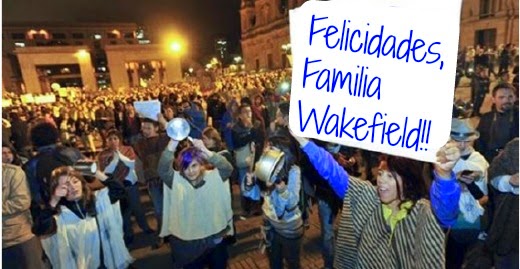 As you can see, the people are bound to keep us blogging!

As for me and my house, we would like to see another five years! There most likely will be some new family members in these next years, probably some new pets, new saints, new ain'ts, new experiences. I'm excited to hear what I have to say - haha!

Thank you to all of our followers, faithful and unfaithful. We appreciate you all!